Save
Villa in Park / EA Architekti 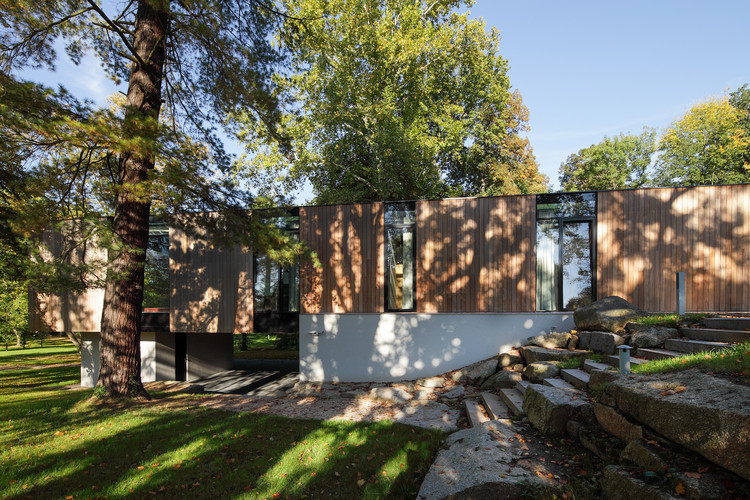 Text description provided by the architects. Investor wanted to build a mansion, where his family could spend their free time together in privacy, surrounded by nature, to practice their favorite hobbies and relax. Interests of the family members are different, interesting and space demanding. Investor found a charming place to realize their project: a private park on the outskirts of the village, originally founded as an English park. By the time the project began, it looked like a mysterious overgrown garden, not a better place to begin deliberations.

Park with an area of 33,000 m² was founded in the 50s of the 19th century in the style of English parks as part of adjacent textile factory owner’s villa complex. Along the northern border flows a stream, originally a millrace. Existing grown greenery consists predominantly of sycamores and other precious deciduous trees in free composition. Land area and monumental scale of existing vegetation allowed consideration of the generous scale of buildings, sensitively inserted into the natural space. New interventions in this environment will be monitored from above by its old inhabitants-trees, which inspired the idea of communication between old and new residents - optical connection between the interior of the house along the entire height up into the trees and trees of looking inside the building. Simple forms of the house do not compete with rich natural surroundings and vice versa complement it.

The project consists of several buildings, footpaths and water feature, small architecture and reconstruction of the park. The family house is located in the southwestern part of the site in relation to the access road. Hunting and fishing pavilion is placed towards the north on the edge of millrace. There is also natural habitat pond on the northwest edge of the property.

The mass of the main house - a longitudinal block hovering between trees, stands on partially ground-embedded first floor. Both floors of the house are connected to the terrain so that users do not disturb each other. Each floor has a separate housing unit with facilities and hobby rooms.

Main wooden facade topped tube of the house is tackled in free rhythm, which responds to the diversity of the surroundings. The main construction is made of reinforced monolithic concrete, facade consists of tropical wood without impregnation and aluminum fixed windows with structural glazing. The windows are equipped with internal shielding, from the outside the house is naturally shielded by trees. Heating is provided by air-water heat pump.

The interior of the house continues in a single concept: floors, doors, staircases tiles and wall surfaces are made of wood or stone or ceramic. The furniture is mostly in-built. Kitchen cabinets have glass surface.