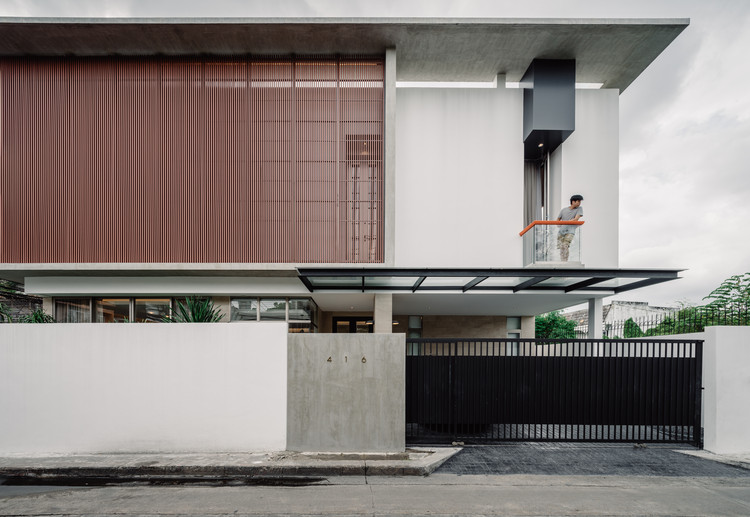 Text description provided by the architects. Bird Bom House is the two houses of brothers located in one of the busiest residential area of Bangkok, Thailand. Though its city centre location, the site is often considered as an unfavourable for building house due to its position. Situated at a dead end of T junction, it is widely known for high rate of car accidents.

Consequently, the project manifests architectural design in a wider context, broader relationship between different scales of experiences which is not only the relationship between both newly built houses but also their existing surrounding. Exemplifies how architecture design can play a part to the city, from one corner of community to one society and city.

Each edge of the house corresponds with adjacent building’s height, in order to infill existing dodgy landscape. Defines a new boundary for this corner by reconnecting facades, deliberately, one front elevation of the building provides inclination of the roof line to guide way for passengers to avoid an accident. Architecture captures beautiful transitions and movements in this unique context, eventually, both houses turn the uninspiring corner into the community’s new node.

Complexity of the area come to the fore, two houses sit amongst Thai shophouses that share different heights, from one storey to four, and disorder façade due to individual extension. BIRD BOM HOUSE mediates all juxtaposition through architectural design.

Four-metre distance between two houses, which is separated by a building law and regulation, is practically designed to be a double volume internal shared courtyard. Using wasted space for being not only an interconnected area between each house but also the street outside, to keep inhabitants be experienced on the ground.

The material choices are selected to reflect and to regenerate all neighbourhood buildings by using same old materials used in the past but in a new way of using it through industrialisation, new patterns and new techniques of finishing surfaces.

BOM’s travertine tile using in ground level is to replace old granites, slim rosewood ceiling and screening are well installed instead of unfit natural timbers. Cantilever roofs clarify edge of the building, the one at top is finished by a concrete skim coat while garage is covered by an engineered 12mm tempered glass roof. Drops of the vibrant colours knitting the house through elements enhances house contemporary also reflects owner’s personality; Classic-order timbered railing is in an orange combined with yellow steel railing at the main hall backgrounded by a green curtain.

Whereas, BIRD’s is more radical and hand-crafted. Finishing the building mostly by a simple painting but in different required techniques, at ground level the wall is finished in a rough texture mixed with patterned aluminum groove line. Innovatively, using black colour on different materials on the upper floor is to create an interesting set of textures; matte brick wall is contrasted with polished aluminium as well as pure concrete is exposed alongside with industrial black steel. 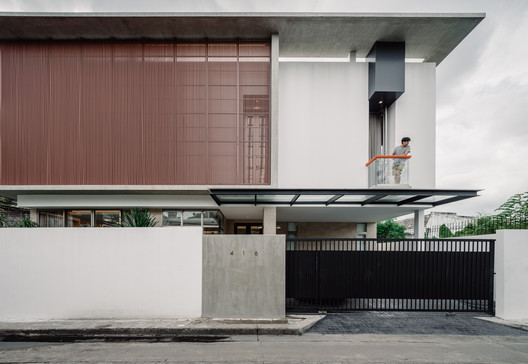