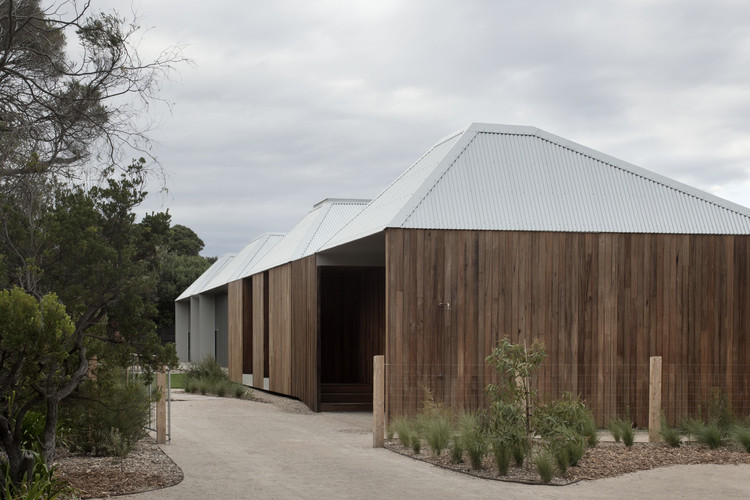 Text description provided by the architects. The Point Lonsdale House is a linear-formed beach-house composed of four interlinked pavilions, each defined by its own vaulted roof form and which holds within it the separate functions of the home. The house is shaped to fit the East-West orientation of its site and is aligned to the southern boundary to allow the living spaces to engage with the long northern garden. Each of the pavilion forms is divided to the south by a series of private courtyard gardens and sheltered decks, which provides the house with a complex relationship to a number of external living spaces.

Formally the house is designed as an island amongst the surrounding coastal landscape and is elevated above and cantilevered slightly out over its ground plane. Over time the native gardens will lap against and surround its perimeter. The slender house presents a monolithic and roughly textured timber elevation to the street while allowing the long northern and more private face of the home to be seen obliquely as it recedes into garden space deep into the site; suggesting patterns of use.

The two separated sleeping zones of the house are linked by a central shared living space which brings all of the occupants of the holiday home together. This central and communal room lifts up spatially to define the shared gathering space of the home. It is entirely and monolithically lined with timber boards, signifying the living space as the social fulcrum and heart of the project. This living space has no apparent deck but instead holds an intimate relationship to the northern gardens and coastal scrub landscape beyond. The timber wall to the western end of this living space, however, opens up entirely as a 4m wide timber pivot wall from the living space, into the north facing the outdoor room.

In this way, the living space spills out sideways into an expanded informal space which brings to mind the simplicity of the traditionally rugged and unadorned beach house vernacular that imitates a built tent rather than a refined urban house. A further operable wall opens out to a more private deck between the kitchen and lounge space. A long sliding steel-framed glass door allows this deck to become an extension of the informal lounge space, and thus re-linking the pavilions of the home via a secondary network of connected outdoor rooms.

The capacity for the house to open multiple large apertures between the interlinked pavilions allows for coastal breeze paths to wash through the home, removing the requirement for air-conditioning and mechanical cooling. The windows to the northern façade are each set within small undercrofts of the roof forms to create deepened and passively shaded eaves. These small north-facing undercroft niches establish a living edge to the house. Elevated to seating height above the ground plane they provide opportunities for lazy napping in the sun, reading while also becoming a stage for children to play and to perform from. 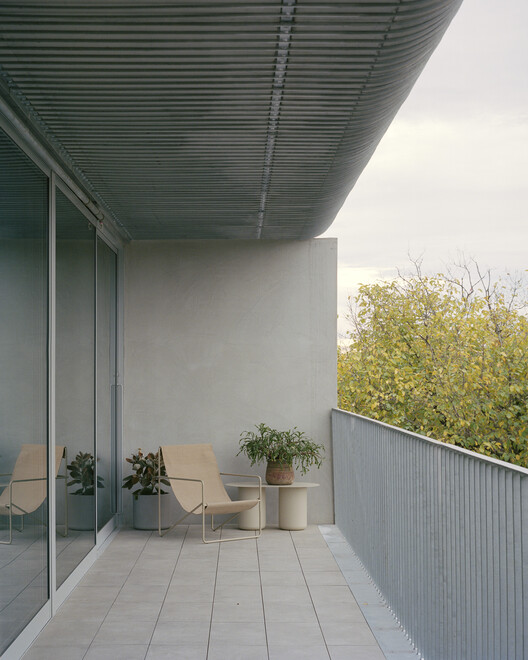