As an entry to the 2019 Evolo Skyscraper Competition, JCPOA Tower was designed to combine cryptocurrency mining with a water park. Created by Ilia Attarpour, Dadbeh Mohebbi Gilani, and Ramtin Taherian, the project considered the US economic sanctions on Iran and the geopolitical crisis around the country's currency devaluation and near economic collapse. The designers proposed a cryptocurrency mining tower under the cover of its secondary water park function. The skyscraper explores how sanctions can be manipulated as a way out of crisis. 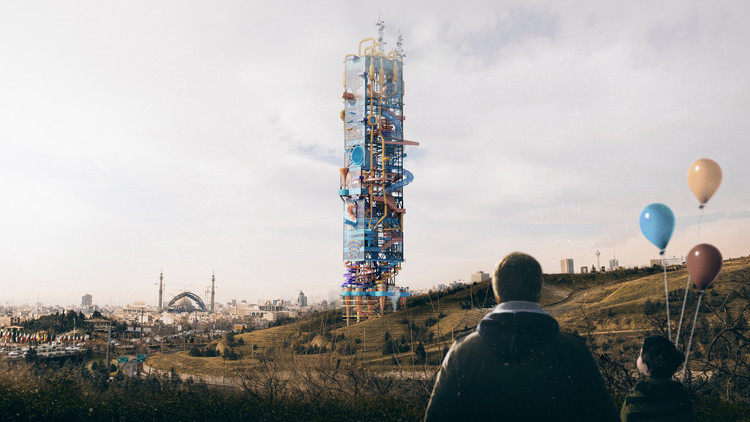 As the team explains, the United States withdrew from JCPOA (Iran Deal), on October 2017, and a new series of economic sanctions were enforced unilaterally by the United States government. These renewed sanctions effectively cut off the Iranian market from the international trade network and have resulted in a near economic collapse. Inflation is skyrocketing while the currency has dropped in value drastically. The JCPOA Tower Crypto-Park asks what is next for Iran as a nation-state? The skyscraper was made as an alternative solution to bypass the sanctions.

The 560-meter-high skyscraper was designed as a mining facility in the air, intended to mine crypto-currencies, day in, day out and all year long. As a way to get around the imposed embargo, mining would have to be done secretly and undercover. Hence, a hybrid type is proposed, a mining farm that is juxtaposed by a vertical water theme park. The water infrastructure hides the hi-tech facility while operating as a heat sink for the processing units on one hand, and providing a vertical landscape of free entertainment for the masses on the other.

The tower is situated on top of an inner-city hill, the Abbas Abbad Hill. A structure of such height and scale will be visible from all around the city of Tehran, as an index of resistance against unjust international politics. As the team outlines, current currency devaluation and economic collapse may be the most severe crisis Iran is facing today. This project aimed to convey this problem through a very radical approach not only to emphasize the current social climate but also to explore topics which architecture can tackle and provide fresh new angles upon. 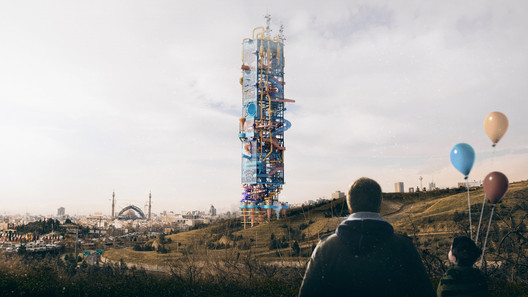