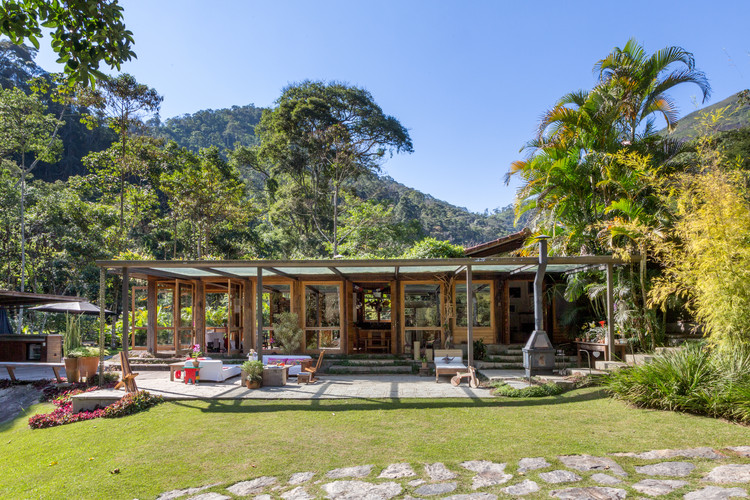 Interview with architect Rodrigo Simão
I was developing for the same couple a different project in Itaipava, another place in the same city. Already in the detailing phase. It was a very horizontal and full of aediculae house, containing independent suites for the 23 and 30 years old son and daughter. The project resembled very much Frank Lloyd Wright prairie houses, belonging to a place, with the mixed structure of Stone walls, steel, and wood. The owners ended up suddenly with the opportunity to acquire another beautiful condo lot in a forest area in Correas and we changed the address of the project adapting the program of construction.

In the new address, in order to insert new architecture in the beautiful existing context, we developed the project together with some reforms services, along 18 months in a very intuitive and collaborative process with the owners, so typical of reforms. Three original suites were preserved and enlarged and a new external master bedroom was created. A new living/dining/playing room with integrated kitchen, home theater, and varanda is the central space of the project, with its customized dining table and picturesque wood materiality. There were created also aediculae such as an open and covered pavilion bar containing barbecue and pizza oven, an ofurô pavilion, fitness room pavilion, workshop/barn, two running water natural pools, inserted in the local river that crosses the land.

18 months before, when we started projecting their other house, in the other neighborhood, I started buying stones, pieces of reused wood, doors and windows from demolitions, rare and high-quality material acquired from different sources that are generally offered to me – people many times want to get rid of this kind of material because they don’t have where to store, where to deploy, or because of the human labour costs involved in restoring. At that same time, I finally could acquire(after 6 years trying) pieces of wood from a heavy engineering firm, that were used as floating decks for excavation and land moving machines in flooded areas.

I tried to buy them to deploy in my house years before, having realized the potentiality of the material, but could acquire only when the place where they were stored changed was sold. The pieces remained for a while exposed to weathering, gaining unique texture without compromising its resistance, because they are high-density hardwood: maçaranduba, garapa, Pau Brasil, ipê tabaco, cumaru, etc. After selection and cleaning of the pieces with bench saw, and a lot of sandpaper manual work, there were obtained 17m3 of high-quality material, in perfect conditions, which makes up large part of the structure of the Project, associated to other systems like metallic structure and sealed waterproof wooden floors deployed in the green roofs, in some parts waterproof concrete slabs, covered by green roof.

The concept was integrating architecture and landscape through the single-story solution and creation of aediculae spreading the constructed area in parts, resulting in a group of pavillions blended with the lush surrounding Atlantic Forest. The project respected local relief, boulders, and native pre-existing species.

Natural materials like stone and wood were extensively deployed, non-reflective colors like English green were used for the metallic apparent pieces and moss green for the apparent parts of external masonry. Bulky pieces of hardwood in unusual formats(23x23cm or 30x30cm) were used in a great part of the structure, as much as the leftovers of the wood cleaning process, creating a wood omnipresence in most of the spaces. Some details like the entrance gate and the barn external cladding are also an example of recycled wood use.

The horizontality of the construction that allows views of surrounding mountains, the creation of aediculae spread through the garden, integrating with the landscape, natural materiality, light roofing systems, transparency, previously developed concepts with the owners, emphasizing adequacy to the existing context. Influences; Zanine, Frank Lloyd Wright, Peter Zumthor, rural architecture from southern Brazil and the northwest USA. The piece of land is enormous(more than 35.000m2) but the existing house had small but very cozy suites, that were preserved.

The living room also with modest measures was enlarged creating a unified and functional space, integrated with the landscape. The house attachments/aediculae – fitness room, master bedroom, workshop/barn, garage, ofuro pavilion, were erected from foundation until finishing. The existing suites were preserved with minimum changes, the living room was extended with a bulky wood structure, creating the central space of the project, the living/dining/playing/home theater/varanda/kitchen room.

The differential was the integration with nature. Landscape design as an architectural element. Wood and stone materiality, the technicity of the spans, 10,5mts metallic beams in the garage, 3,80 cantilever structure in fitness room, and in pizza/barbecue metallic/wooden roof. The living room, kitchen, and home theater are one only unified space, with no partitions. Even though with modest measures, adapted from the existing house, the large wooden framed glass openings and the integrated space visually expands the domestic life towards the garden and the region magnificent landscape.

There is a comfortable and functional spatial sizing avoiding excess baggage for life. Wood deployed as the main element, in flooring, structure, windows and doors framings and roofs create a tactile and cozy atmosphere. In the corridors, closets and suites bathrooms, skylights were created making use of natural light.

From a sustainability point of view, deploying reused stones and wood minimizes cut of trees and rocky quarries, investing in human labor rather than in extractive, being considered responsible and ecological use of material, according to LEED-GBC. Lightning: Indirect lighting throughout the house, in amber color tone, very comfortable for the eyes. Centennial trees lighting and different colors of light for each element, stones, water and trees/bushes. Light fittings designed in copper, harmonizing with wood structure and with the gardens The exploitation of topography, stones, native arboreal species.

The precise insertion of new species and the clever use of existing elements. Landscape designer: Lula Cancio – Floriverde Paisagismo Integration with nature, natural materiality, spreading the construction in parts, creating an interesting route through the luxuriant Atlantic Forest natural landscape, resulting in a light architecture that responds and belongs to place. From different points of the garden, you can see the famous mountains Mãe D’água, Pedra do Cone, Pico da Alcobaça, interacting with architecture. In general, the structure was made from wooden square logs (23x23cm and 30x30cm), and thick wooden planks, masonry parts received moss green acrylic painting or wooden slats cladding. New wooden windows framings with wide openings were made from Freijó.

Sustainability – reusing material, skylights in closets and bathrooms. Automation – irrigation, lighting cenarium and entrance gates. Wood, Stone, and steel were predominant, combined in many ways. Wood for the visual, animic and thermal comfort.Stone, for the perenniality, deployed in many external flooring areas, garden stairs, natural pools claddings, paths pavings, and some wall cladding. Sleek steel structures associated with wooden floor pieces, sealed with an asplalt blanket and covered by native epiphetae, in a green roof system that demands no soil, contrast with bulky pillars made from square wood logs. The wide span of the garage, the big cantilevered roof in the fitness room and in barbecue cover were possible due to metallic structure, "i” profile and square tubular pieces. 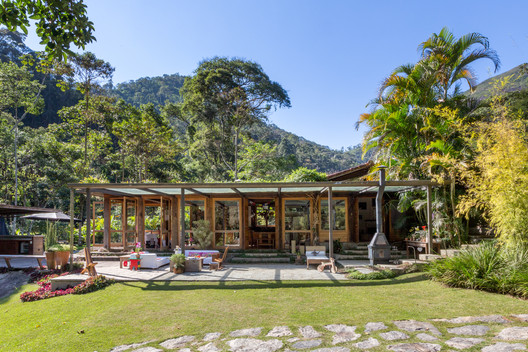