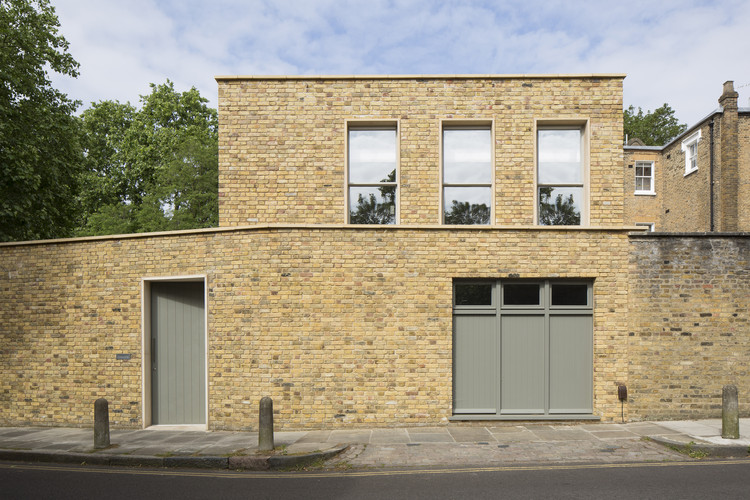 Text description provided by the architects. A new build house was commissioned in June 2016 from Mitzman Architects in the conservation area of Canonbury, Islington. It was to replace an awkwardly sited post-war house, unsympathetic in character with the neighboring houses and conservation area, thermally inefficient and dilapidated. But it did look south over a spacious garden with several large trees. Asked for was an aesthetically quiet contemporary and sustainable five bedroom family home that sat with ease on its site and suited a contemporary lifestyle, with natural light and sun, overlooking and opening into the garden.

The house sits unobtrusively behind what seems to be a garden wall along the street edge, over which the tall trees make a leafy visual expansion of the street. Accommodation is in two wings. Along the back edge of the site is a two-story bedroom wing, its façade aligned with the taller listed 6-9 Canonbury Place. As a result, no windows were allowed on two of the façades and the spaces had to be carefully arranged to maximize light. The main bedrooms have been designed to overlook the garden across a central courtyard and the single-story wing with the living and dining spaces.

The garden extends visually into this sheltered court, which brings abundant light into the center of the ground floor, through sliding patio doors that open up both long sides of this open-planned wing. The courtyard is in the center of the plan which allows for vistas through multiple spaces on the ground floor. It greets all visitors as they arrive through the front door and has been carefully planted with species that constantly change throughout the year offering a different experience with each season.

To embed the house in place it is clad in brick that will weather and mellow with passing time. Contrary to what this might suggest, and the layout tailored to the specifics of site and lifestyle, the house was factory prefabricated in timber for speedy, airtight construction. Structure, walls, slabs, and roof were assembled on site in just 14 days. Speed and minimizing disturbance to neighbors, were, along with the recessive design and brick, the key to ensuring the support of the neighboring community. Despite the sensitive setting, planning permission was granted with no objections and construction completed in 11 months.