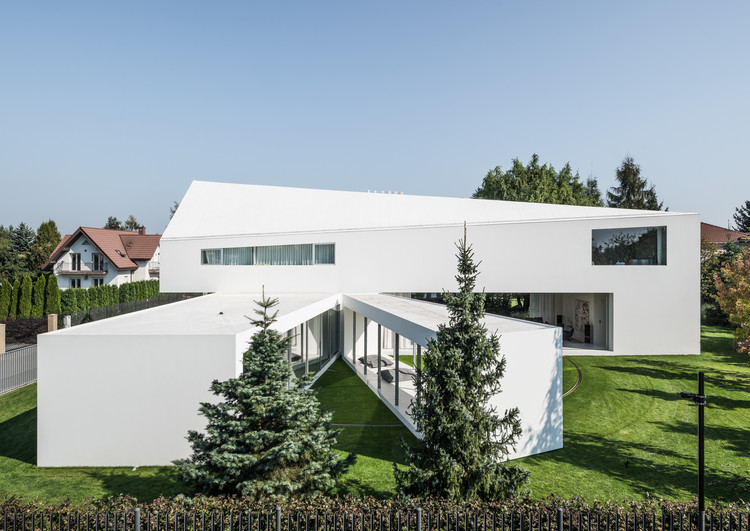 Text description provided by the architects. Clients wanted most simple, sunny and relaxing house, somehow reacting to the movement of the Sun. They also liked our Safe House, its changeability and mechanisms that create relations with the surroundings. The starting point was a regular shape unbuilt site, located in the suburbs among the average single-family housing. We placed a rectangular solid on it, corresponding to the wishes of investors in terms of the functional program.

Then we turned the part belonging to the ground floor to get as much privacy as possible from the side of the road. In the "cut" space was located a living room, roofed floor and open to the garden - a similar solution can be found in Living Garden House, where the night zone is on the floor and the day zone becomes part of the garden - the boundaries between architecture and the landscape are blurred.

The investors' wish was a simple house with a flat roof, but the local plan imposed sloping roofs. Therefore, from the street side the house has a gable roof, and from the garden side a flat roof. This design movement became at the same time a solution for the requirements of customers and spatial law, which ultimately created a non-standard, characteristic house shape.

A living room and a spa part are located on the garden, perpendicular to each other. Investors wanted a house reacting to the location of the sun, which is why we used the motif of the quadrant – an old device used to determine the position of the stars. We have designed a terrace that reacts to the sun and follows its movement: gives the inhabitants sitting in its space shade and pleasant airing; depending on the time of the year, it regulates the amount of sunlight in the spaces it adjoins - in the summer giving the desired shade, and in the winter allowing more sunlight into the interior.

In addition, an electric blind system has been applied, thanks to which it is possible to completely shade the day zone and SPA. The construction of the walls and ceilings was made in monolithic technology, additionally, the roof truss was built in wooden construction. As a wall finish, STO plaster was used - the MILANO acrylic filler in white and the roof cover is a white TPO FIRESTONE membrane. The white color also dominates in the interior - white epoxy resin was used on the floors.

Mechanisms by which the terrace of the building moves are designed and made by Comstal. This company collaborated us in the construction of Safe House, Konieczny's Ark and National Museum in Szczecin Dialogue Centre ‘Przelomy’, which are also equipped with a various kind of large - scale, moving elements.

The movement of the terrace and its speed is adapted to the sun's wandering. The drive system is fully automated and has advanced safety sensors - if it encounters an obstacle, the terrace stops, making it completely safe to use. However, for funcional reasons, manual control is also possible. The terrace has been programmed to be in constant motion during the day, thanks to which natural grass grows underneath. 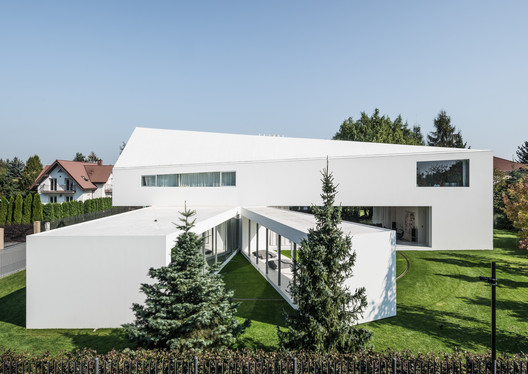