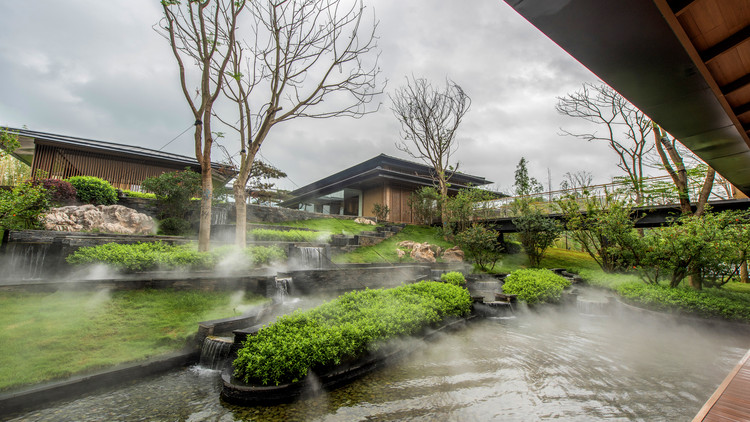 Text description provided by the architects. The project is located at Genghe Town, Gaoming District, Foshan City, Guangdong Province. Foshan is a key city of GBA (Guangdong-Hong Kong-Macao Greater Bay Area). The project area is about 80,000 square meters. The meaning of Shiye is to “pick up the fun of life in nature”, based on this idea, we want to create a natural art village, integrates entertainment, tourism, vacation, shopping, culture, art and education in one town.

The “Shiye Art Space” opened at the first phase of this project to demonstrate the experience for customers. The project unfolds itself along the sloping fields with an area of 1200 square meters, it is a single-floor building block with a courtyard in the middle.

Concept Development
1. Sloping Fields
To place a group of buildings on sloping fields usually start from two directions of thinking, the building massing can either embed in the site or float above the site in the air. Along with these two ways the team quickly developed some concepts. In terms of the simplicity, purity and also the uniqueness of visiting experience, the former idea seemed to be more creative.

2. “Floating Courtyard"
There were problems occurred during the design development, digging the sloping fields would require a relatively large amount of excavation and construction, that would highly increase the cost and the difficulties of construction.  The more critical problem is that we seem to proceed with some alienation based on the original Linnan Town. To retract the original idea, the courtyard layout should be the main tone of the space, the design should relate to the site but also being independent with it at the same time. That finally led to the idea of the “Floating Courtyard”.

3. Tipping Point
After determining the direction of “Floating Courtyard', the design team rearranged the structure of the design logic. The purpose of the space is based on the landscape views of the land located at the high ground of the whole site, the views are towards a variety of vegetation over a wide open water scene. Thus the views along the path are important factors to consider, and the tipping point of the project should be the high-quality landscape. The visitor can be directed and attracted by the views along the pathways towards their destinations. Eventually, a “Cantilevered Bridge” extended from the axis of the project towards open the natural views and become the core tipping point of the project, it is the link connecting the whole space.

Circulation
Stepping up the stairs aside the river, a little gate appears in the shade of trees. Enter the gate, pavements changes into more organized order and you find yourself in a half-opened courtyard. The front door automatically slides open and the reception desk awaits you in the hall. Standing in the space for a moment and then take a turn, a straight walkway extends far away outside. Walking along the “floating bridge”, the terrain started to declines, the spaces get warp around by trees and bushes. Past a group of low-rise roofs, you finally reached the end of the “Axis sky bridge”. On the cantilevered platform you are already above the curved water bank and thousands of acres of forests, looking over the silhouette of the mountains in the background. We believe under such context, the viewers will find this scene an unmemorable moment.

Space
The whole space is weaving around the “Axis Sky Bridge”.  In front of the reception area, the site height difference level up the bridge and the reception area. You can reach the viewing platform at the end of the path directly. Their activities all happen on a continuous plane without a break. The spiral stairs lead guests into the rooms for a visit. The exhibition hall, conference room, resting area, and service space each located in an independent building, and four buildings together circle around the central courtyard. The arrangement of the courtyard follows the slope of the site, sloping into the water from the north side to the south side. The building elevate above the site on structures, with exhibition hall at the highest point; the center of the yard has an open tearoom, which becomes the spiritual center of the courtyard.

Facade Control
The features of buildings of the project are the single floor, four-sided roofs. To increase the delicacy of details and reduce the weight of the roof at the same time, we utilized metal materials for roofing. By covering the facade with a paint finish that imitates the look of rammed earth and wood-like material finish, we can achieve the light structure feeling like wood texture, and use of more light colors would be another enhancement. There are lots of wood louvers and sunshade, which could build the gentle transition from door and windows to the wall, that method unites the building as a whole, it also creates an atmosphere of crossover space. This is how we present the shiye art space with the concept of “floating courtyard”. 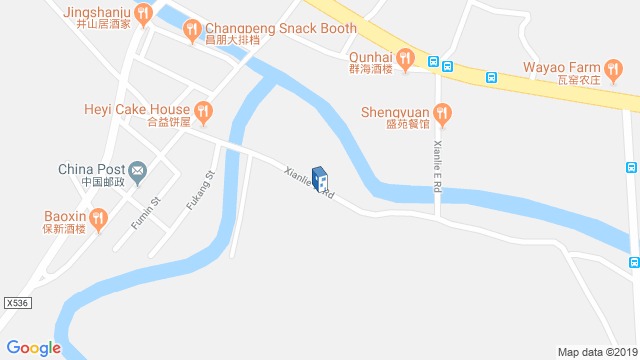 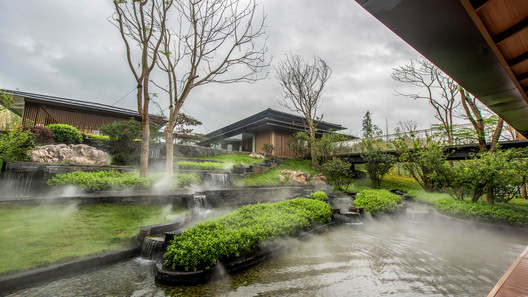