Design practice GRAFT has designed the first mobile Volo-Port for air taxis. UK-based global vertiport owner and operator Skyports and air taxi pioneer Volocopter unveiled plans for the Volo-Port – the physical landing pads for so-called eVTOL (electric take-off and landing). As a collaboration between GRAFT Architects and Arup, Berlin agency GRAFT Brandlab won the competition for the Volo-Port design, and construction is scheduled for completion this year in Singapore. 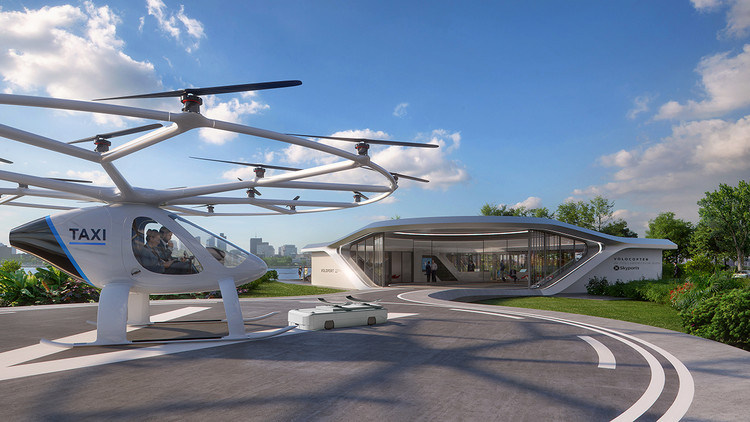 Vertiports are the only physical infrastructure required for air taxis to commence operations in cities in the near future. Volo-Ports are designed to provide passengers with a seamless air taxi experience that is safe, secure, and relaxing. The German air taxi company Volocopter developed the first fully electronic vertical take-off vehicle that flies autonomously and is accordingly ideally suited for use in urban areas.

The interior design concept of the Volo-Ports combines lounge, security and departure areas with a hydraulic landing platform that makes it possible to board the Volocopters sheltered from the weather. The result is a flowing space that carefully orchestrates the passengers’ experience and contributes to promoting acceptance of three-dimensional passenger transport. The air taxis depart from the roof of the Volo-Port or from a landing platform off to one side, depending on the specific situation.

The modular Volo-Ports make it possible to seamlessly integrate this new form of passenger transport into existing urban infrastructure. Possible implementation scenarios include railway stations, airports and unused roof surfaces as well as floating Volo-Ports mounted on pontoons, utilising the free air corridors over rivers and other water surfaces. With these new Volo-Ports, as they are called, Volocopter has made an important step towards a new form of urban mobility that is airborne and based on electric energy.

Partners for Volo-Port plan to build it in Singapore for the scheduled public flight trials in the second half of 2019. A full-scale Volocopter vehicle is currently on display at the GreenTech Festival. Next to the GRAFT Founding Partners, Klemens Sitzmann (Project Designer), Marvin Bratke (Project Lead), Nick Boer, Miloslav Cvetkovic, Daniel Finck, Ben Goern, Ivan-Felipe Ucrós Polley, Ahmed Rihan, Mohamed Elyes Zahrouni, and Vlad Zangor (Project Team) have been involved in the project. 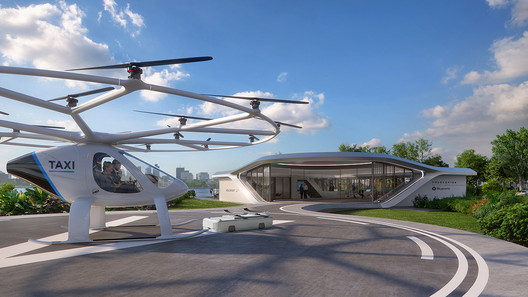