Save
House Behind the Wall / Mjölk architects 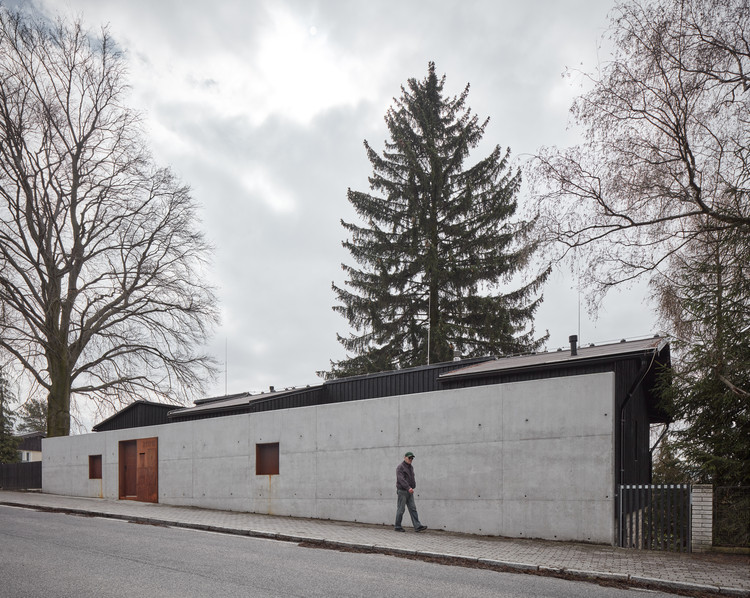 Text description provided by the architects. It all started with our clients’ purchase of a house over a hundred years old. The traditional building with a gable roof was at its end. Its stone basement was still in a good condition so we decided to take down the rest of the house and use the stone socle in the basement as a foundation for the new house. Our courageous and somewhat risky plan worked out and today, the clients live in a beautiful, modern house which combines the historical soul of its predecessor and nordic esthetics with a touch of industrial style. What can we say? The road to success is not always an easy one but it’s worth it to put in a little extra effort.

The lot borders a busy road which serves as a starting point for tourists heading to the Jizera Mountains. Because of this we designed a new concrete wall in place of the former exterior wall of the old house. This will not only decrease the amount of noise from the nearby road but also define the outside entrance area to the house. Behind the wall is a small yard with a view of Ještěd which serves as a guidepost between the entrance, the guest house and the stairs to the yard below.

The construction of the new part is wooden. The asphalt roof together with the black, tar-painted facade reminds us of the shed that used to stand here. On the old stone foundation behind the concrete wall are actually two houses; a family house and a small guest house for a young sailor, the clients’ son, who spends most of the year at the helm of transatlantic ships.

The parents’ house is more complicated as its building design had to encompass the needs of three different people - a friendly couple and their daughter. The wooden addition above the basement ceiling consists of bedrooms, an office, a bathroom with a toilet and an outdoor yard with a sauna. Sauna therapy is a pleasant variation during the harsh northern winters. That’s why the clients hardly let it cool down.

The living space of the house is defined by large windows on both sides. The window on the southwest facade brings the view of the Harcov stream valley and Ještěd while the north window shows the previously mentioned sauna yard. A couple of steps lower is a living room stairhead with a fireplace and a wide staircase to the kitchen and dining room which are connected to the patio. The rest of the basement is used as a utility room and storage space.

We enjoyed designing the interior. There are many custom-made elements. In the bathrooms you can find water taps, some of which were replaced with copper pipes and garden taps. In the bedroom there are wardrobes hanging from the ceiling so that they don’t take up so much space and keep the bedroom, walk-in closet and bathroom interconnected.

The kitchen counter was designed in a way that retained the former granite blocks from which the lower part of the house was built. The yard is modest yet beautiful. A couple of large trees give the impression of a mountain forest. A few pots were added around the vegetable garden where the wife keeps fresh herbs. 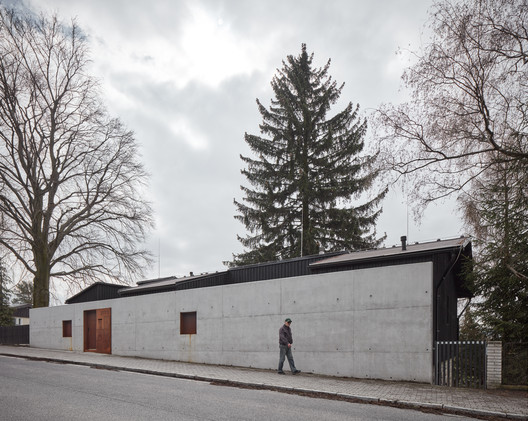