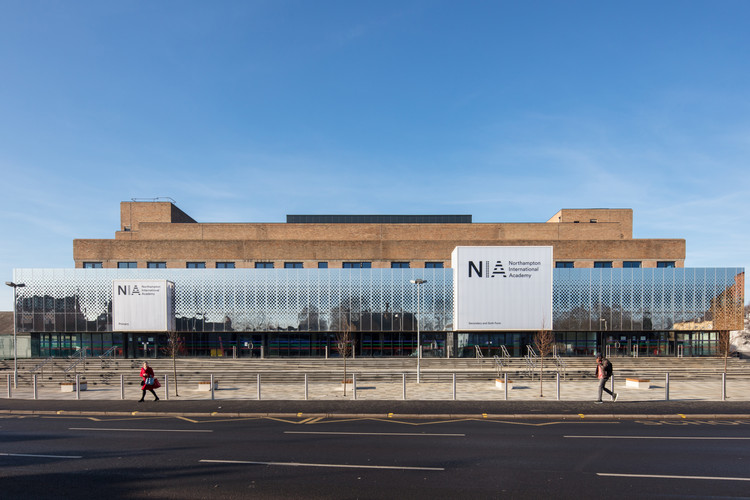 Text description provided by the architects. London-based architecture practice Architecture Initiative has completed a project to turn the largely windowless, utilitarian, industrial building into an education hub filled with natural light and expansive views; designed to motivate and inspire. The 1970s building stood derelict for eleven years and had become a local eyesore, attracting antisocial behavior. Architecture Initiative identified the opportunity to ambitiously reimagine the vast brutalist structure as a school while celebrating the best of its exposed concrete structure and features such as its massive open spaces and waffle slab ceilings. Northampton International Academy accommodates 420 primary pupils 1500 secondary pupils and a 300-place sixth form. The main mass of the building structure remains largely unchanged.

A screen of perforated, polished metal wraps around the building’s brick exterior, refreshing the façade, which is finished with two illuminated signage boxes that indicate the entrances to the primary and secondary schools giving each age group a dedicated entrance, directly off the new public plaza, which can be separated from the building’s alternative functions. Arranged around the building’s perimeter, enabled by steel-framed mezzanine levels inserted in the 6-m-high spaces, the teaching rooms are allowed maximum access to natural light through new window openings which have been punctured through the existing external walls. Extensive circulation corridors, enabled by the sheer size and depth of the building, are used as break-out learning spaces and social areas.

The deep plan also prompted Architecture Initiative to insert vertical voids through the existing waffle-slab structure, adding roof lights in order to bring daylight into the heart of the interior and create open circulation with visual links between floors to visually connect the different year groups and teaching spaces. On the top floor, a four-court sports hall, lined in perforated plywood paneling has been inserted as a new steel structure into the former external courtyard. The facility benefits from infused natural light through translucent polycarbonate panels; an unusual but beautiful feature for a school sports hall. As much as possible, the existing finish of the original building has been respected and reused, with a clear distinction created between old and new.

The existing waffle-slab structure remains exposed, as do the new building mechanical and electrical services, and its standardized 0.9m-centered modular grid is used as a basis to inform and set out the spatial arrangement of the entire school. Differentiating the old and new, white plastered partitions have been inserted into the concrete shell to divide teaching rooms from the atria. Where possible, glass screens are also used to keep visual links and lightwells open. Each area of the school benefits from colorful wayfinding devices, seen mainly in the glass manifestations and the vibrant flooring choices for the main circulation stairs, acting as a wayfinding strategy to navigate the different areas of the school. 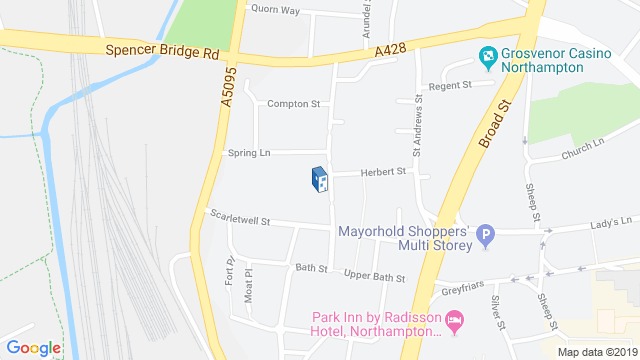 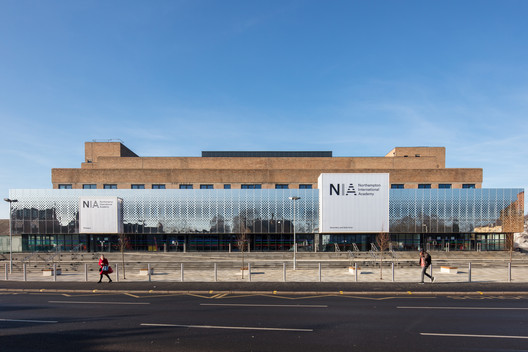