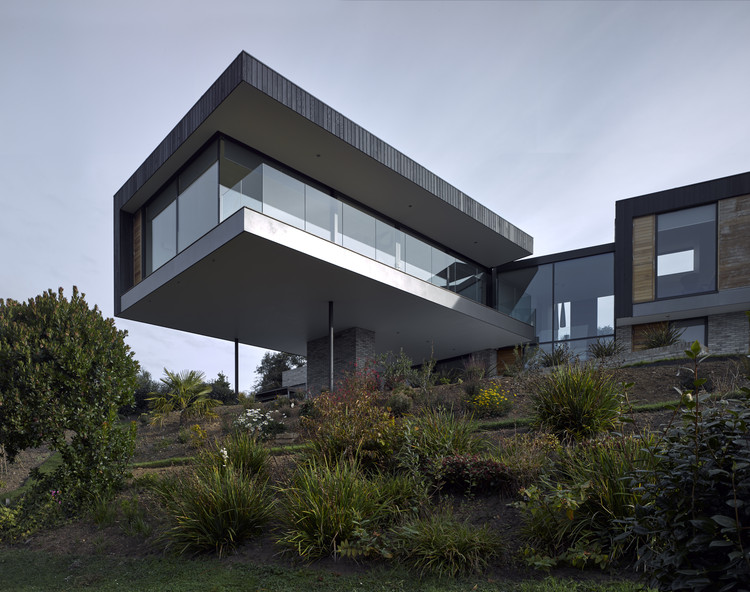 Text description provided by the architects. Sitting on the banks of the Falmouth estuary, the site faces west with views south towards the sea. Immediately below the site lies the Grade II listed house ‘Creek Vean’ designed by Norman Foster and Richard Rogers, then practicing as ‘Team 4’ that was built in 1966 and is perhaps the finest house built in the 1960s in England. The presence of such an important modernist house immediately­ below the site sets a very high standard indeed.

The plan of Creek Vean is split into two wings by a grass-covered staircase and opens to the views through splayed rooms – our design takes a cue from this is also splitting the house into two distinct elements – a bedroom/study wing that sits along the contours, and a living wing that runs against the slope. A bridge provides access into the glazed hallway between these two forms.

From the lane, the house appears as slightly mysterious ‘blank’ walls, with a bridge inviting entrance into a glazed atrium (a solid front door prevents the immediate view until opened). The walls are clad in a dark, almost black, timber cladding, heightening the sense of mystery and evoking traditional tarred Cornish fishermen’s buildings. To the southern side, a two-story-high wing contains bedrooms and study spaces, lit from a high-level clerestory to the north.

Bedrooms are fully glazed and set back beneath an over-sailing roof offering solar shading, while balconies shade the lower floor rooms. From the west, the upper timber level sits atop a chalky brick base to appear to ‘float’. To the northern side, a flat-roofed living room incorporating kitchen, dining and utility spaces project out into the site in a dramatic cantilever above the dropping site - so that the living room gains fabulous views out across the estuary. The deep roof overhangs also prevent any glare when viewed from the estuary or from across the Creek.

This cantilevered living space would make not just an extraordinary place to live among the treetops, but a dramatic architecture to complement Creek Vean. A chimney – the epitome of home and Englishness – impales the living wing and creates a bbq space on the sheltered terrace below. The house has solar panels set flat on the living wing roof and the pitched roof over the bedrooms is designed to receive photovoltaic panels. 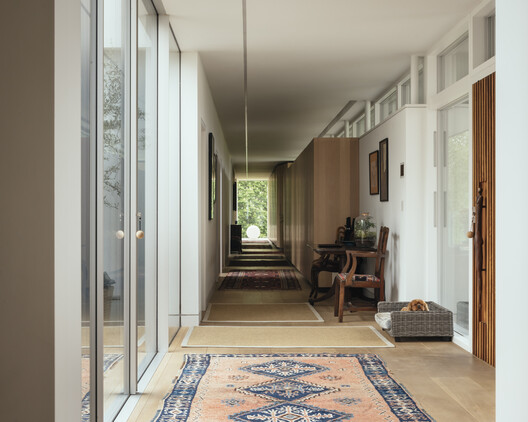