Toronto & Dubai based Machou Architects Group, founded by Nedal Machou, has designed the world's longest urban agriculture park for Dubai. Designed to transform the city's most vital highway into an eco-valley, the project has been developed in response to the lack of functional public spaces and sustainable outdoor spaces. Reimagining Sheikh Zayed Road, the project centers on Dubai's main transportation artery and its primary link to other cities. 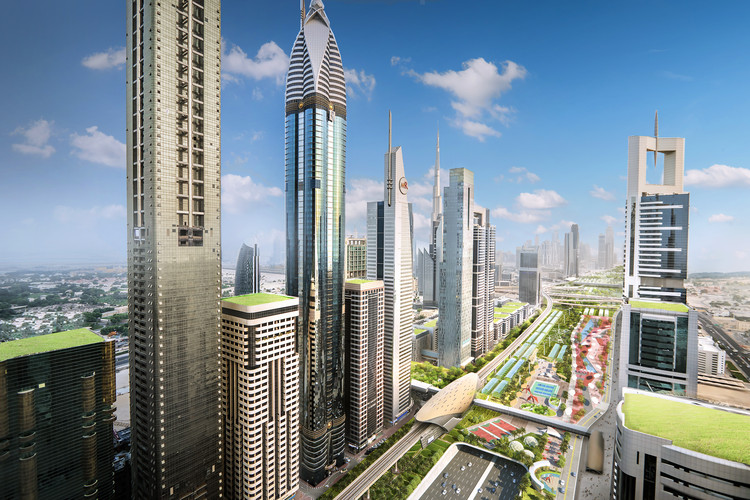 Sheikh Zayed Road transformed over the years as the urban mass evolved, turning into a wide vehicular river that splits the ever-growing city in half. By sinking the road underground, Machou's project transforms the underutilized land into a 25 km long, 350 hectares of prime urban agricultural land, and a catalyst of public spaces to drive social capital development and generate economic value and sustainable growth.

The park will consist of 80% productive agricultural land of various indoor climate-controlled environments, as well as open air date palm tree farms. Situated in the heart of the city, it will sustain a significant portion of the commercial requirements for certain grown foods and will therefore produce a positive butterfly effect by reducing the environmental footprint associated with transporting and storing vegetables – a true farm to table model. The non-productive leisure landscape areas of the park move away from the heavily planted, high-maintenance designs typically found in the region, as we aim to create a blueprint for environmentally sustainable park that embrace local materials and vegetation. This will support building a native ecosystem of plants, birds, insects and cross-pollinating bees.

When completed, Super Park will be a 25 km long stretch of accessible pedestrian friendly green space, with a surface area of about 700 football fields lined up together, a luxury gift to Dubai citizens subsidized by its high value and efficiency of crop production. By connecting the different nodes of the city longitudinally, the green valley spans some currently vacant parts of the city and will increase the appeal and marketability of such areas overlooking a grand public amenity of this scale. The teams believes this will in turn contribute to a higher social connectivity of the urban fabric, and generate more supply leading to a healthier competition and a more stabilized market.

The project will be built in 7 sequential phases, spanning approximately 4 km in average between the major interchanges along the highway. The underground road tunnel will emerge above ground at the intersections and connect to the crossing bridges, allowing narrow segments of the park to continue beneath the intersection. Dubai Super-Park stitches the urban fabric back together to reunite the segregated flow of people, nature, and energy. 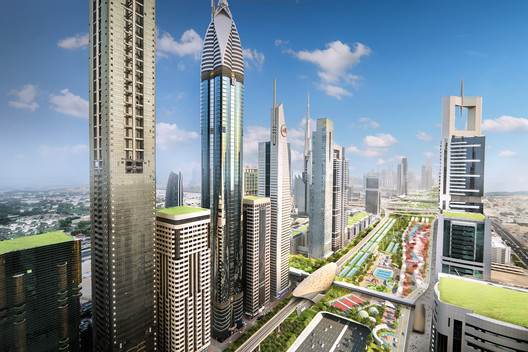