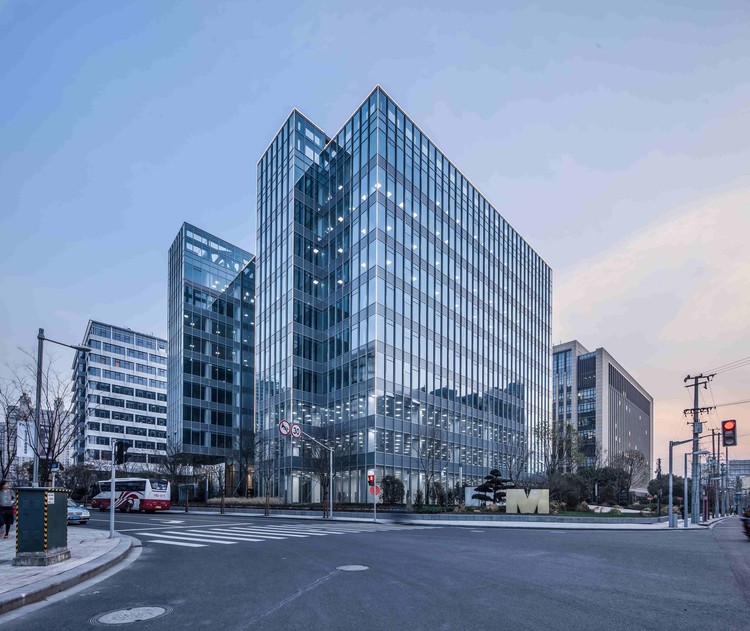 Text description provided by the architects. Champion Center, located at the north of Xuhui Riverside Business Area, is a business building for medium and large organizations. Its site which presents to be a relatively square trapezium is narrow in the north and wide in the south. The center faces the main road East Longhua Road at north and borders on three large-scale commercial complexes and office buildings at east, south and west. On its north locate a residential community and Dong’an Park.

The purpose of this project includes two aspects. One is how to add space and interface which is positive and open to this area on the city scale. The other is how to create a business environment that is benefit for social communication and ecological sustainability on the architectural scale. The pivot for the two above aspects lies on the research of the office space model as well as the possibility of the new office space environment to provide better interaction between architectures and city.

At the beginning of the design, we compared many plans and persuaded the owners to abandon their strong advocates for the central core tower mode. As an office building covering a standard floor area of 2,500m2, the central core-tube model is ought to be an efficient and reasonable option. However, compared to other standard office buildings that are already built or yet being built around for large property developers, this project will not be superior in space and other conditions if it continues such traditional office building mode since Fordism. Furthermore, if doing so, the 45-meter high single  large-scale volume will not only lack a good external visual proportions but also cannot bring a positive relationship between the internal and external space of the  large-scale homogeneous business area.

In light of the owner’s clear requirement on dividing each layer into two units at most for lease, we propose an ‘I’-shaped pattern for each standard layer. The two slab-type office buildings with decentered cores at north and south respectively will be connected by an overpassing elevator hall starting from the elevator atrium. The usable space of the office unit is not less than 12 meters in depth and it stretches out both to the eastern end and western end providing a much wider and deeper office space. Such pattern makes the office space much more flexible and available in various combinations and creates better conditions for lighting, ventilation and view.

In addition to the transparent elevator atrium in the middle of the northern and southern units, there's also an outdoor landscape atrium at the west. The two atriums integrate the indoor and outdoor space as a whole and turn the traditional nontransparent core-tube center into a transparent one, showing and extending its public space inside to the city.

The flat interface at both north and south side and the serrated interface at both east and west side reflect a different relationship between building and site. We make the entrance hall interface at southeast in alignment with the atrium so as to form a 7.5-meter deep suspending volume of the upper office unit, which does not just show its distinctiveness to the city but also works as a beacon to guide people better to its southern entrance.

At the base of the south-side office building there is a two-floor high entrance hall which stretches to the north until reaching a 45-meter high elevator atrium. Besides, with the ‘L’-shaped sunken garden going along with the east and south around the building and the pool-combined glass roof in landscape atrium, more natural light and air will be brought to the multi-purpose space on basement one.

The facade material and tectonic treatment inherit the feature of the concise and transparent building. The office unit facade are all glass curtain walls equipped with vertical sun-shading boards while the interlayers are installed with roller coated aluminum plate in similar color. The hall facade on ground floor is enclosed by glass curtain walls supported by glass ribs. Frameless glass suspension curtain walls are erected as the two enclosure interfaces at the eastern and western ends of both elevator atrium and landscape atrium in same height which maximizes the penetrability of the public area.

Adopting such concise and restrained design, this project is able to provide an efficient, vigorous and ecological environment for business performance as well as play a special and positive role in this region. 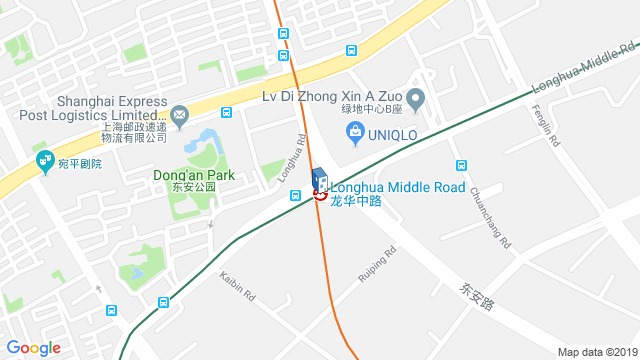 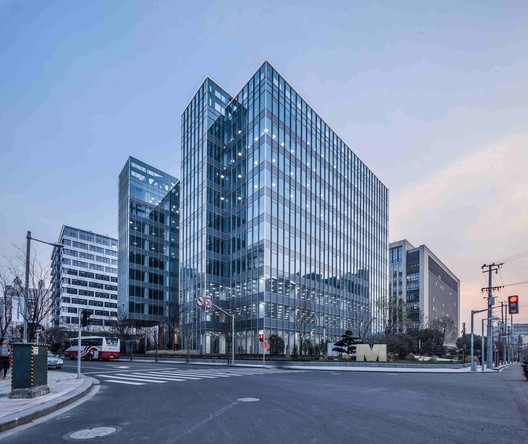