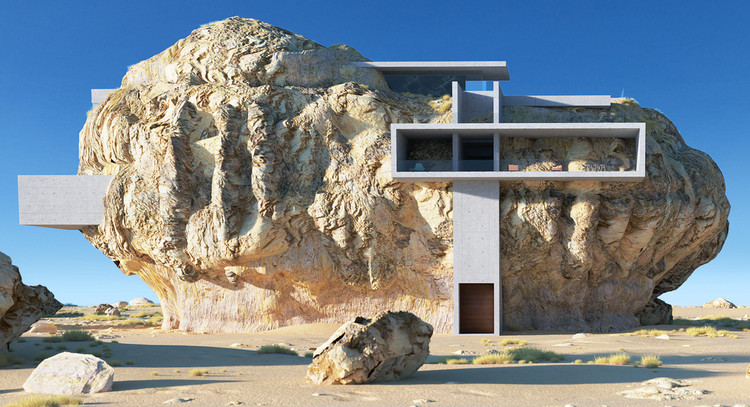 Although architecture has been constantly evolving, past builders have laid out a huge amount architectural heritage for us to learn from and get inspired by, and integrating natural elements with man-made structures is no exception.

Shanghai-based architect and architectural photographer Amey Kandalgaonkar found inspiration in the rock cut-tomb of Madain Saleh in Saudi Arabia, and with the same architecture approach, designed two residential projects that incorporate architecture with the rigid parts of nature.

In order to achieve visual balance - taking into consideration the complexities of the rocks at the Madain Saleh - the architect chose to use simple planes and volumes for his first proposal, House Inside a Rock. He began his design process with the imposing rock, which was developed from scratch on a 3D software. He then merged the house with that rock, but kept its visual impact from eye-level as minimal as possible, having the total intervention of the architecture only witnessed through a bird’s eye perspective.

For his second proposal, Rock House 3, the architect had a different approach, leaving the desert rocks as intact as possible, which is why the structure’s mass was elevated on pilotis, creating minimum impact on the rocks below it. Here, the architect’s inspiration came from the city of Shanghai and its floating road intersections. There twisted forms and intersections create enclosed spaces beneath them, and with that observation, Kandalgaonkar designed his second structure. Many of the house’s openings were placed facing the interior courtyard to maintain the visual strength of the twisted geometries. Enclosed openings also serve as a protected area from the deserts’ sandstorms, which was crucial considering the project’s location. The interior staircases were a mix of ramp and flat sections, with some being open from above, facing the sky. 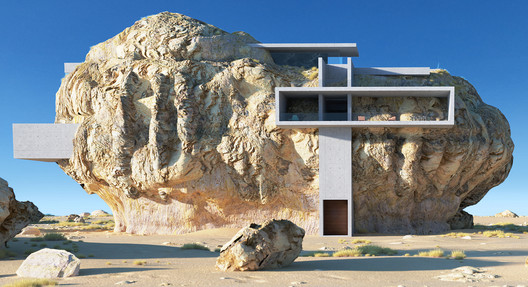