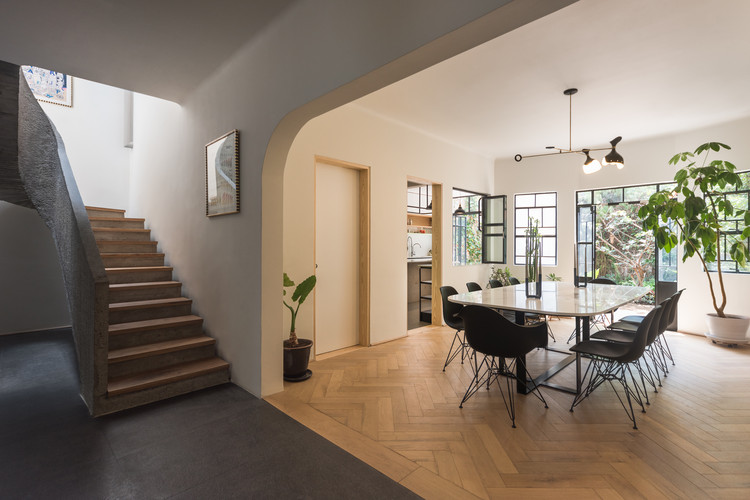 Text description provided by the architects. The project consisted on the final phase of the rehabilitation of a mid-century house that had been previously intervened in two initial stages between 2014 and 2016 in which the second and third floors were transformed into a temporary apartment and a terrace respectively.

Each of the three stages of the project intended to make a reinterpretation of the proportions, atmospheres and motifs of the epoch in which the house was built; combining original elements with the new palette that coexists with the preexistence and generates new experiences within the house.

The third phase concluded the­­­­­­­ process of development; it integrated the house into a whole element by completing the program so that it could respond to the desires and needs of the clients. In order to achieve this goal, public and service spaces located temporarily on the second floor, were relocated to the first floor, leaving upstairs only the private and served spaces of the program.

Finally, the three levels were articulated by the presence of the stairs, where a central concrete monolith was designed and raised, becoming a sculpture in the heart of the house that gives meaning to its surrounding spaces.

Designed for a young couple with a taste for design, art, and decoration, the project parted from various references in which the mood of the space, its sequences and atmospheres were defined. Elements such as frameworks and furniture were reinterpreted in order to achieve coherence with the existing and rehabilitated surroundings.

A sober yet functional material palette composed by wood from oak and ash trees, steel window frames, raw carpentry furniture, brass detailing, and granite and quartz surfaces, was chosen in order to recreate the desired setting in which textures are enhanced by the natural light that dissolves in the curvature between ceiling and walls.