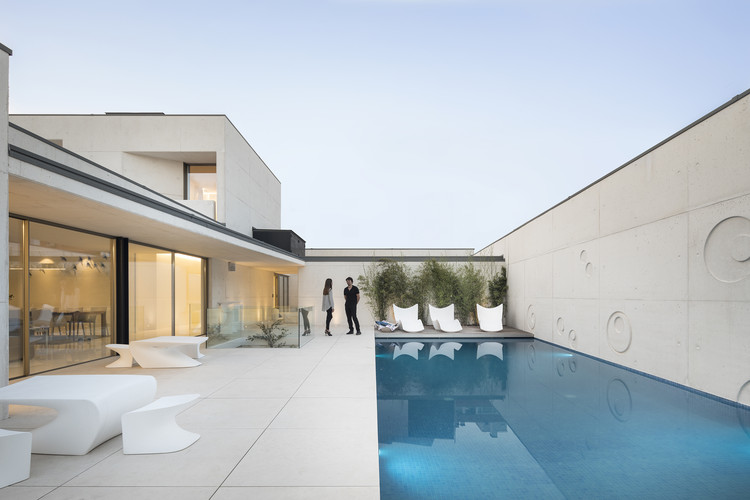 Text description provided by the architects. The site. It was an intervention in an eclectic architecture building, dating from the beginning of the 20th century, classified by Águeda UMP (Urban Master Planning) as public interest property. This building,  located in Av. Dr. Joaquim de Melo, parish and municipality of Águeda, displayed a set of decorative elements in its facades, influenced by or with Art Deco references and, as it happens in other buildings of the same type, a higher element, tower- like stood out in its volumetry, which was positioned in the body of the building closest to the public street, only as decorative effect. Its integration into the urban grid plan, where this typology of isolated single-family dwelling predominates, and its visual relation and proximity to the public garden Conselheiro Conde de Sucena, assign an added value to this building, besides its historical particularities in the context of the early twenty-century Portuguese architecture.

The propose. The architectural value of this property located in the city heart contributed to the owner’s decision to carry out a rehabilitation and expansion project for the building, so it could suitable for her own residence. The whole process, from its conception to the final solution, was made up of progress and setbacks as well as of a constant critical analysis of all participants, including the property owner. The functional organization of the house was designed not only to create interdependent relationships between the different existing interior spaces and the proposed ones, and those with the outdoor space, but also to respect issues such as energy efficiency through solar orientation and comfort of the dwelling house. On the other hand, there was also the concern to adjust these aspects to the requirement of creating a living place with some privacy in relation to the surrounding zone.

The intervention in the property included demolition works of the interior divisions, removal of pavements, cleaning, and rehabilitation of the facades, preserving all the decorative elements that characterized them. For this purpose and before the facade cleaning works got started, moulds of all the decorative elements were made, assuring this way, the integrity of the original design.

Program. The program carried out on the two floors of the pre-existent property comprised, at the ground level, the entrance area and the living room; on the first floor, the library and a bedroom with a walk-in closet and ensuite bath. The proposed extension area included two-floor interconnected volumes. In one of these volumes, the ground floor was designed for the kitchen and backup areas, while the first floor would encompass two bedrooms and their corresponding ensuite bathrooms.

This new body got linked to the pre-existent building assuming some formal and volumetric commitment, being connected through a small volume, which enhanced and marked the new intervention. The texture, colour and pattern of the new white concrete construction contributed to create the relationship between the two bodies which, although widely different in their architectural language and so far apart in time, sought the possible dialogue, not only through volumetry, but also with some elements and materials that designed their facades.

The second extension of the body links directly to the first one and it also comprises two floors, a basement and a ground floor. The basement was designed for the parking area, cellar and storage room, whose access is done through an outside ramp and by an interior staircase that stands next to the service area. On the ground floor there’s a living room, a small exercise room and sanitary facilities to back up these two spaces and the pool. This single-story volume is rectangular-shaped and its placement near the pool helps create an outdoor area with some privacy.

In the outdoor area of the swimming pool, a quadrangular open-air lounge was introduced, which allows to enjoy the view over a garden on the basement floor, as well as providing natural light into the basement and the cellar space. The annex building situated on the north and east ends connects to the service zone of the house and includes a laundry, a kennel and a covered backup area. In the non-built up area, a green zone was created with grass and some bushes. 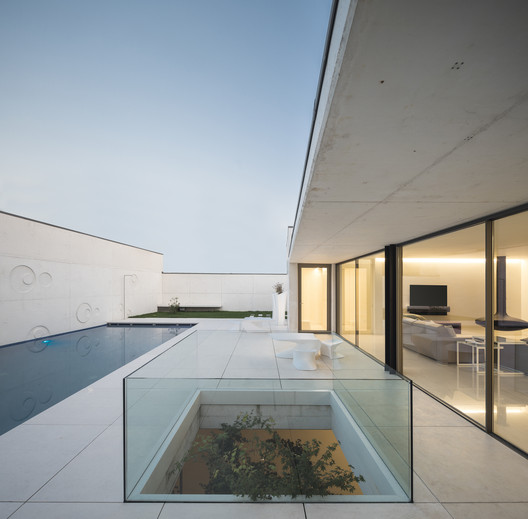