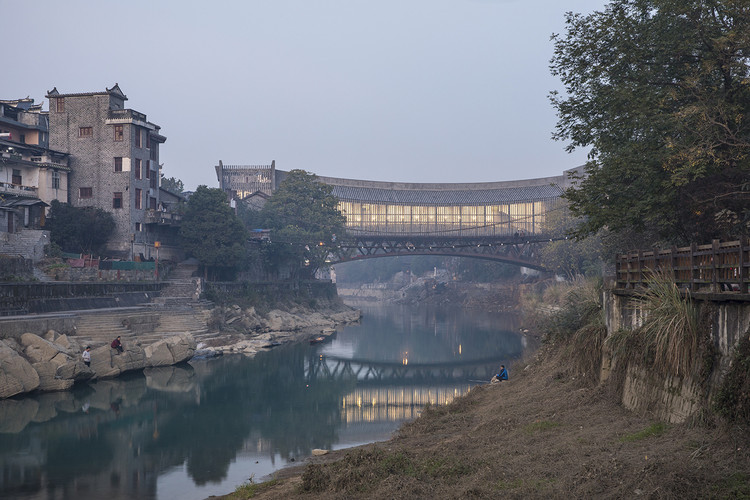 A Social Cause
The city of Jishou, where the Jishou Art Museum is located, is the regional capital of Xiangxi (western Hunan), a minority autonomous zone. Initially, the municipal government considered parcels of lands in the development zone outside the city; however, we the architects proposed to build the art museum in the center of the old town because we believed that a cultural facility should be easily accessible. A river called Wanrong runs through the middle of Jishou, which makes the most central location for the art museum over the water course and the art museum then doubles as a pedestrian bridge naturally. We hope that people in Jishou would not only make a special trip to see art but will also encounter art on their way to work, to school, or to shop.

Urban Intervention
Typical contemporary cultural institutions in China, such as museums and theaters, are treated as freestanding monuments, from away from the communities. In Jishou, since we think an art museum should not be isolated from its users, it is inserted into the existing urban fabric, which is built up with row buildings along the Wanrong River that house shops, restaurants, bed-&-breakfests, often with owners living upstairs. Therefore, the front entrances of the Jishou Art Museum on both riverbanks are part of the mixed-use street walls and integrated into the everyday life.

Reinterpretation of Tradition
Covered bridge has a long tradition in this mountainous region of China and named Fengyu Qiao, meaning wind-and-rain bridge, which is not only used for crossing river or valley but a public space where travellers take a rest and vendors set up stands. Our design creates a contemporary interpretation of the age-honored building type. We introduced art as a new program on a covered bridge while maintaining pedestrian traffic and stop meanwhile translating the formal language of the Fengyu Qiao into a modern one.

A Bridge-Building
The art museum is composed of two bridges, one on the top of the other. The lower level is an open steel truss structure that resembles a roofed street for pedestrians and allows the flow of floods ; the upper level is a concrete arch cast in-situ with a painting gallery inside. In between the two bridges, glazed walls and tiled shading system enclose the art museum's main hall for temporary exhibitions.

Supplementary spaces to the art museum, such as the entrance hall, administrative office, shop, and tearoom, are situated in the two bridgeheads at either end. People can enter the museum from either side of the river.

Jishou Art Museum is the outcome of artist Mr. Huang Yongyu’s initiation and donation, completed in April 2019 and will have its opening exhibition in the summer. 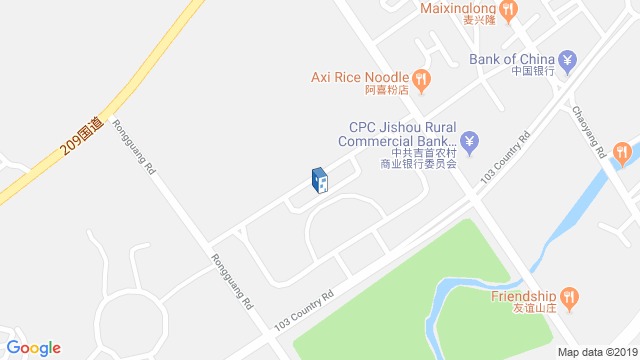 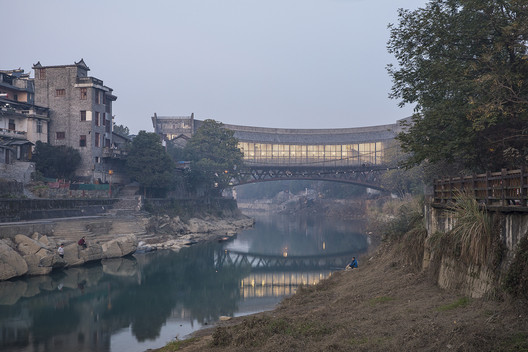