1024 architecture has released details of their exhibition at La Philharmonie de Paris. Freed from the classic codes of presentation, the exhibition adopts a raw, deliberately urban design, including a scaffolding structure reminiscent of concert scenery. The firm as also designed a digital installation, Core, whose light sculptures change with the soundtrack. 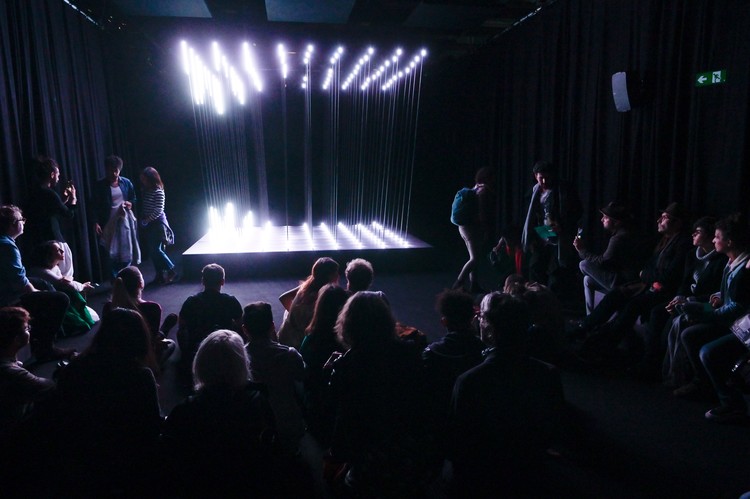 The immersive exhibition, titled ELECTRO, is the result of a close collaboration with Sonos, dispatching visitors along a journey into the heart of the electronic music revolution. The exhibition is curated by Jean-Yves Leloup: a journalist, DJ, sound artist, and curator who has been at the front line of the emergence of the techno movement across France for the past thirty years.

1024 architecture, led by Pier Schneider and Francois Wunschel, are the creators of numerous audiovisual and scenic devices over the past ten years that combine architecture, computer programing, and electronic music. For the ELECTRO exhibition, they have curated three elements: WALKING Cube, SQUARE Cube, and CORE.

WALKING Cube is a structure co-authored by Francois Wunschel and Jason Cook, a simple cube brought to life by a series of mechanical agitations. When animated, it becomes a basic shape turned animal, performing twerks, tweaks, growths, folds, and kinks. Air-power mechanics allow for diverse transformations, demonstrating the chaotic abilities in a common and minimal form.

SQUARE Cube, originally realized for the Beats and Cubes World Tour of Etienne de Crecy (2007-2014) will be presented in model form. A scaffolding device six meters by six meters will contain video-mapped cubic geometric shapes. 1024’s projects will be set in motion through various digital animations within the cube, creating a sense of illusion synchronized to music.

CORE has been designed especially for the exhibition, with a name inspired by computer processors and digital creations that accompany most electronic musicians in concert. CORE turns music into volumes of dynamic light, acting out an original piece of music composed for the installation. The CORE is located at the heart of the scenography, taking the form of a three-meter by three-meter cube with a matrix of 81 LED bars inclined by 24 degrees.