The Ilan and Asaf Ramon International Airport has opened in the Negev Desert of Israel. Designed by Amir Mann-Ami Shinar Architects and Moshe Zur Architects, the project was made to service the Red Sea resort city of Eilat and the surrounding region. The airport's design was influenced by the futuristic world of aviation and the project's natural desert surrounding. Commissioned by the Israel Airport Authority, the project is Israel's first civil airport built from scratch. 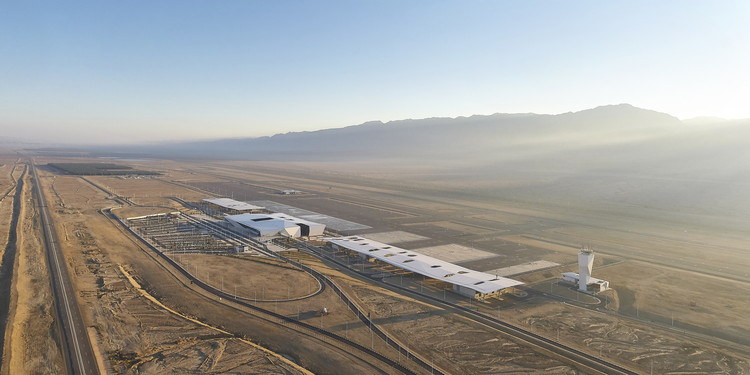 Mushroom-like rock formations found in Israel's National Timna Park served as inspiration for the initial geometry of the Passenger Terminal Building as a self-shading volume. Mimicking how the rocks are shaped by the "natural movements" of wind and water, the Terminal's opaque volume was carved by the "natural movements" of the passenger traffic. The airport was designed with a 45,000sqm Passenger Terminal Building, a 3,600m long Runway and Taxiway, alongside 40 Aprons, allowing for domestic and international traffic. The two support structures to the north and south of the terminal are a combined 36,210sqm with a 45 meter high Air Control Tower.

The Terminal's envelope consists of a steel and concrete skeleton structure, cladded to the exterior with insulating aluminum triangular panels, continuous from wall to roof that create one single mass. Glass curtain walls were inserted to surround patios and introduce the natural desert landscaping into the building. These serve as light wells allowing natural light into the depths of the Terminal. Towards the interior, the building's volume is hollowed out and the envelope is cladded in a contrasting bamboo-wood, uniting the ceiling and walls over one continuous space.

The landscape design development drew inspiration from the existing river delta fan created by the mountain flooding into the desert valley. The winding paths of the parking lot and the landscape development follow the shape of the natural spill from the streams. In addition, local plant seeds were harvested and preserved at the site, grown and incubated in greenhouses during the years of construction, and finally returned to their original location, to serve as the desert vegetation lining the airport's landscape.