Save
Eastern Blocks: Concrete Landscapes of the Former Eastern Bloc
Share
Or
Copy

Eastern Blocks by Zupagrafika is a photographic journey through the concrete peripheries of the former Eastern Bloc, inviting readers to explore the districts that became a playground for mass housing development after WW2, including objects like houses ‘on chicken legs’, soviet ‘flying saucers’ or hammer-shaped tower blocks.

Showcasing modernist and brutalist architecture scattered around the cities of Moscow, Berlin, Warsaw, Budapest, Kyiv and Saint Petersburg, the book contains over 100 photographs taken by Zupagrafika, with special contributions by local photographers. Divided into 6 chapters, Eastern Blocks includes a foreword by Christopher Beanland, orientative maps, index of architects and informative texts on the featured cities and constructions. 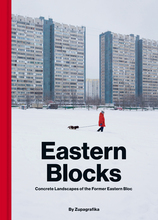