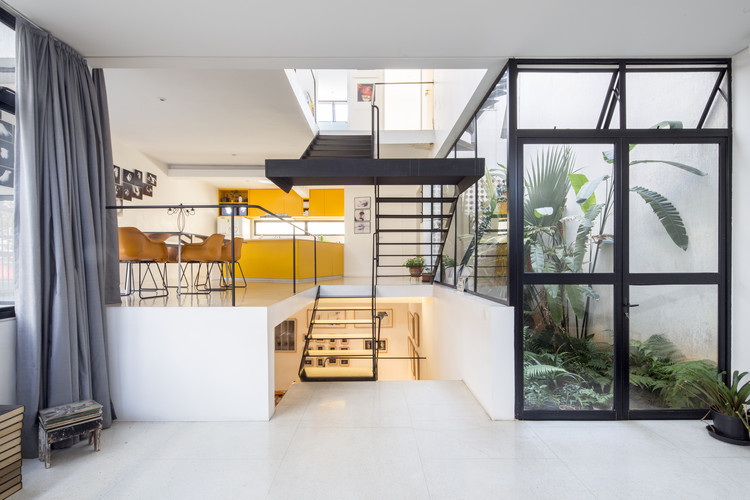 Text description provided by the architects. W3 South House is located in W3 Sul on a terrain resulting from the demolition of a previously existing construction. The house resulted from the accumulation of images and references of it authors Carlos Café and Horia Georgescu, who proposed a volume formed by a succession of planes with sealings that offers a delightful play of volumetric balance where opaque and open surfaces alternate.

Café designed the residence for his own use, a challenge he faced in an attempt to surpass the visual sense of the project in order to approach it as a continuous recombination of spaces formed by multiple relations and ambivalences. The mismatched slab levels allow unexpected appropriations that are amplified by the free visual communication among levels.

Ambients are developed around three internal empty spaces, each related to one of the levels. On the ground floor, the surface is duplicated to delineate the living room and the kitchen. The metallic stairway reaches the middle floor that connects the studio underground and bedrooms in the upper floor. The terrace is formed by a garden that, along with the empty volumes of the patios, forms a permeable projection of the whole house.

Construction faced structural challenges, such as vibration resulting from the intense flow of buses on the street just outside and the intrinsic connection between the structures of the adjoining building. It was necessary to cut beams and preserve part of the original foundation during the excavation of the underground in order to avoid compromising the stability of the adjacent building. Café and Georgescu also had in mind the flexibility of the plan as they proposed an arrangement that allowed erecting walls to delineate spaces, as in the case of the antechamber in the upper floor, which may be converted into a bedroom.

Carlos Café is also a visual artist and the human body plays a central role in his work. For that reason it is not surprising that his house was imagined according to that fact. When he photographs bodies, the artist builds and rebuilds the anatomy using intense chiaroscuro contrast - something similar to the arrangement of unexpected open spaces in the ambient of W3 South House. It is up to the passage of time and seasons to tone surfaces as days and months go by. In order to solve the contradictions between visual dimensions and the intrinsic needs of a home, the architect created a dynamic space that fits his dreams and those of whoever come to integrate their own experiences or their particular way of habitation to that place, therefore continuously rebuilding its space.