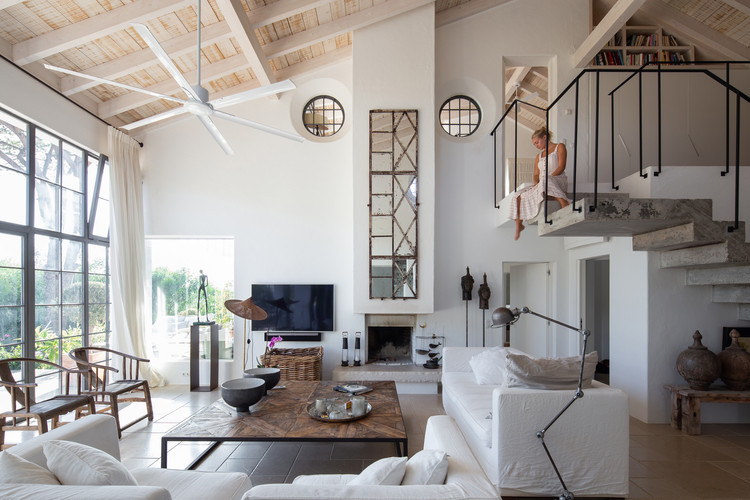 Text description provided by the architects. With a lot of care and attention to detail, the client set a specific vison for the house. It should keep and even emphasize its rough and strong character that it had been forced to acquire in order to withstand the strong forces of the beach weather and it should let all the beautiful Algarvian light into all rooms.

Situated on a soft-sloped plot within a forest of Iberian pine trees with small  but very distinct, view lines to the ocean and facing South, the house provided perfect conditions for a Feng Shui-inspired home by the ocean. The general orientation of the house created the ideal energy flow for the client, reflecting her strong and uniquely authentic character.

The CORE team began by adding a few important Feng Shui adjustments, like centering the entrance door and making it North-facing. In addition, CORE revitalized an existing, but neglected, patio, as a featured connection of earth and heaven, while at the same time making the patio part of the kitchen area and a visual extension of the smallest bedroom.

The requirements for the layout were very clear: The client wanted to extend the amount of space in her new home to double the sized area of the living space with a two-story extension. Open-space living, as well as connecting inner and outdoor space, were some of her key priorities. In addition, as a mother of three grown-up daughters, each one used to bringing friends over, and with four dogs and one cat, she didn’t want to be worried about delicate materials or damaged surfaces.

The client also prioritized the use of authentic materials and appliances over modern or high tech “snobby chique”. She chose rustic natural stone and wood for the flooring, rough linen and wood for furniture and interiors, un-manicured concrete stairs, micro-cement uneven plaster and crittall windows. Old fashioned toilets, with high tanks and chain to pull the water, installed light switches, and rustic metal stands for the heavy natural stone wash-basins contributed the rustic character of this house.

In addition to following a standard bioclimatic study that forms the basis for all our design concept development, this house had to follow additional guidelines, including combining Feng Shui philosophies with the basis of the bioclimatic study. We determined, among other things, the prevailing winds, which contributed to the cooling of the house. The positioning of the façade windows played a special role. Natural cross ventilation was an important factor, which in combination with specific calculated shading, ensured an ideal living environment and avoided overheating or undercooling of the house through energy losses.

Following the bioclimatic analyses, the upper windows to the West were calculated to be significantly smaller. But the client’s passion for sunsets convinced us to be less strict on energy-efficiency and agree to a less energy effective dimensions. A decision that, in hindsight, proved clearly not regrettable, as the Algarvian sunsets are spectacular to look at. Due to this priority, an air conditioning unit had to be installed. Contrary to popular belief, the Algarve can be very damp and cold during the rainy winter periods. Although the big windows allowed a passive heating of the space, the inferior thermal resistant crittall frames led to bigger energy losses that had to be compensated by installing a heat-pump controlled underfloor heating and an open wood fireplace.

Due to the high earthquake risk in South Portugal, a concrete skeleton structure was chosen as the type of construction. Good thermal insulation in the building envelope was crucial to achieve the desired energy efficiency standard. For the outer walls, heat-efficient clay blocks with high thermal insulation were used.

The house was built with thermal clay tiles with mortar-free butt jointing. These are produced in Portugal and are fast and easy to work with. Their thermal performance is more than twice as efficient as the traditional bricks that are conventionally used.

The visible oak beam roof construction provided double ceiling height over the living area and a quality craftsmanship roof over the master bedroom. Combining traditional detail with efficiency and value, all roofs were also highly insulated.