Liljewall arkitekter has released details of their competition entry for a new hotel and housing complex in Varberg, on the west coast of Sweden. The site, an old industrial harbor area, is currently being transformed into a new district in a city renowned for its Moorish influences, a home of old timber architecture, and a history of shipping, sailing, surfing, and spas. 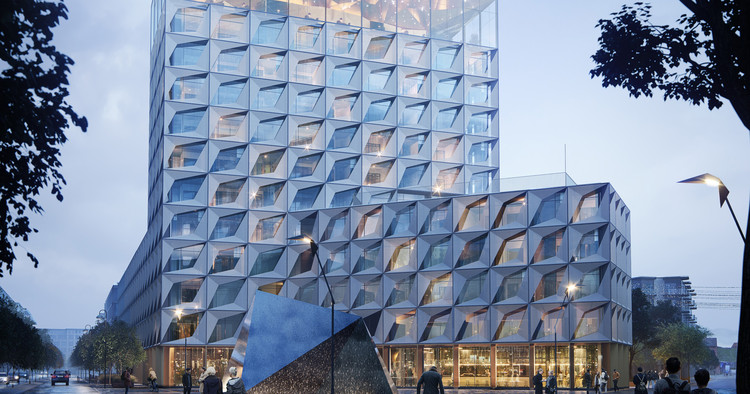 Liljewall’s proposal, developed in collaboration with Lotus Hotels and builder Wästbygg, was inspired by the history of the city, with the goal of creating a building that stood out from its context while still respecting its roots. The twelve-story scheme is constructed of solid timber, with an exposed laminated beam and post construction in a strict pattern forming the facade. The pattern of the grey timber beams and posts acts to lighten the structure while creating a sense of depth.

Within each square opening of the façade, there is a fabric formed into a three-dimensional shape giving the impression of a sail. The sails create a pattern that wraps around the entire building, with a pattern inspired by Moorish decorations that also protects rooms from the sun. The ground floor is however void of sails, giving the building a transparent and welcoming feeling by exposing the activities taking place within, and connecting the ground floor to an open public square.

The design includes hotel rooms, student dorms, and business apartments. A hotel structure will include different themes of restaurants, a large theatre, and meeting and conference areas. The program also features a rooftop spa with gym, while the ground floor contains a bar and brewery. At the top of the building, a restaurant with a view of the city features high, sloping ceilings visible from the ground, acting as a beacon by reflecting light out to sea. 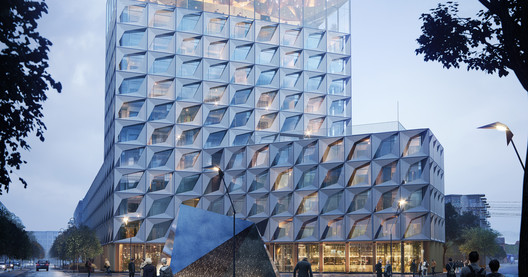