#donotsettle is a project about Architecture and Experience. Watch 100+ more videos related to Architecture on their YouTube Channel, or see what we are up to on Instagram and Facebook.

10 Years in the Making

When Raffles City was completed in the second half of 2017, it undoubtedly marked an important moment for UNStudio. This large-scale project (almost 400 000 sqm) formed the first presence of UNStudio in the ‘Middle Kingdom’. And they entered the large market with a bang. The 2 towers rise to 250 meters in height, gently weave, twist and turn to form a dynamic ensemble while incorporating a large-scale mall at its base. The project is located in Hangzhou, a city about 150 km from China’s financial center Shanghai. While Hangzhou isn’t that well known outside China, the city is one of the most prosperous on the mainland. Nowadays perhaps more famous by being the home of technology juggernaut Alibaba than the more idyllic west lake, Hangzhou is rapidly developing with new areas, districts and financial centers. Raffles City is a key point in one of those new districts. Located along the river, Qianjiang New Area is aiming high. Skyscraper after skyscraper rising out of the ground, the one bolder than the other. But no doubt that UNStudio’s dynamic lines shape the new face of Hangzhou.

Standing Out From a Distance

We started our visit to Hangzhou on an excruciatingly hot Saturday from the eastern high-speed railway station. Perhaps to most ‘china-way’ of getting around is picking up one of the shared bikes littered on every street corner. While making our way towards the Qianjiang New Area, the Raffles City towers quickly became visible. The fluid shapes made it stand out from the more conventional shapes very easily. Rising 250 vertical meter, the twin towers of UNStudio were our guide while shifting through the more and more decreasing traffic. Qianjiang New Area was only established a decade ago with construction still in full swing. With large office towers, a wide range of hotels and more than enough commercial space, the new area caters more for a weekday crowd since there is rather an absence of residential buildings. Hence the decreasing traffic when we got closer. We could observe the towers and its context from a distance, confirming our opinion that UNStudio was clearly not trying to blend in. The dynamic lines definitely stand in stark contrast with the surrounding high-rise.

UNStudio’s large scale complex stands on a prominent site adjacent to Hangzhou’s citizen center and opposite an overwhelming looking development still under construction by Skidmore Owings and Merill. While every development tries to catch your attention, either by height, shapes, façade pattern or color, its Raffles City that runs away with all the glimpses. Located on a square plot, the towers are placed diagonally to create a maximum of distance between the towers ensuring optimal views. In between the towers, at the base, the designers pressed a large-scale mall rising 6 levels. While this sounds like any typical mixed-use development, in terms of program and positioning, it becomes quickly clear that this isn’t your usual mixed-use development. What makes it different is that the large volume is shaped in a way that the user isn’t overwhelmed.

Gentle curves twist and turn to turn a horizontal plane into a three-dimensional volume guiding your eye lines from ground level to the top. Lines diverge to create sunken courtyards, lines turn to open up large voids and lines twist to frame views. And it's these lines, that while standing out, blends the projects into the immediate context.

Fluid Lines In and Out

Smoothly merging in and outside, with some semi-outdoor courtyard, the development attracts large crowds of young-adult shoppers. Strategically placed entrance plazas guide people inside throughout the large corridors towards the central atrium space. A simple color palette of grey tones combined with warmer wood textures organize the spaces in a three-dimensional way. While the standard malls follow a well-known setup, this mall creates a more human scale experience. There isn’t a large atrium stacked above each other with corridors along. What this mall does differently is instead of a large atrium, it creates a series of smaller scale atria, that move as you make your way upwards. This creates a more vivid circulation pattern bound together with an element we mentioned before already. The wood texture of the railing surrounds the atrium (for obvious reasons) but also continue along the escalators to create a multidimensional network guiding the shoppers through the entire space. The blending of inside and outside also take another dimension when roof gardens are integrated on top of the mall. A vortex of movement guides the visitor to different platforms at different height offering views over the ‘new’ Hangzhou. Lines of both podium and towers merge to create a dynamic space.

A Destination within the ‘New’ Hangzhou

Observing from both close-by as from a distance, the project swirls a certain dynamic reaching beyond its own perimeters. Mixed-use projects have been around for long, they form the bulk of every new area within the newly established districts of megacities. A typology that strives for interesting shapes to warrant the ‘destination’ tag, and in this category Raffles City outshines its competitors. The dynamic lines shine far, making it the true destination within Qianjiang Area or even Hangzhou? 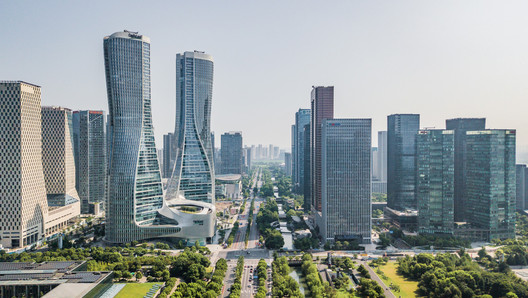