Save
UR London Flagship Store / DOMANI 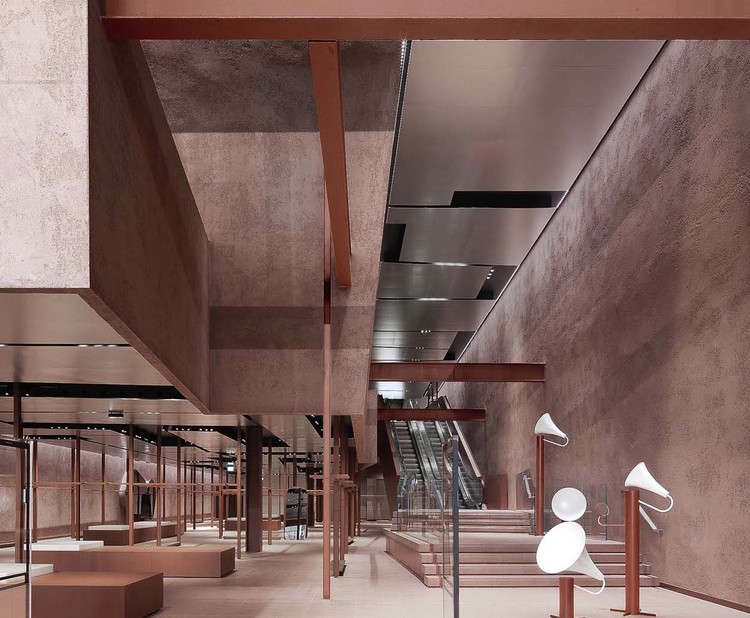 Text description provided by the architects. In 2017, Zara closed its biggest flagship store in China, H&M had continuous declination profit, Topshop announced that it would temporarily leave the domestic market, in the past two years, international fast fashion retailers are growing at a slower pace, meanwhile, UR China, the leading fast fashion brand are expanding worldwide, it is the first Chinese fashion brand in Westfield Mall, west London. This store is not only the first flagship store in Europe, but the largest UR flagship store in a globe scale, what else it is with no doubt thelargest commercial milestone for Chinese brands in overseas single stores.

Continued UR Chengdu & UR Shanghai flagship store successfully established and promoted, DOMANI Architectural Concepts and its co-founder Miss Ann Yu was invited to design UR London flagship store. How to present a Chinese enterprise in an international market, emphasizing the self-confident and firm gesture of overseas business strategy attitude of domestic enterprise, and delivering pioneer and visionary brand culture, became the primary requirement of this case. To extend the “Fine art and urbanization “space concept, the designer’s creative logic consists of 3 parts:1) Culture and aesthetic globalism and regional symbolizations, emotional and contemporary; 2) exclusiveness and aggressiveness of business image strategy; 3) global versatility of space-building materials and structures.

The space concept is uncharacteristically open and transparent, with a large wall as the main image of the store and as a metaphor for Western political conservatism. The horn-shaped device ‘THE SOUND’ has become a fun element to break the metaphor of thick walls. The SOUND, which symbolizes different cultural fragments from around the world, was set up as a sonic sensor in the early stage of the creation. It will play the collection of different cultural fragments from the world with subtle sound materials, and micro-voice control through the sensing distance between customers and devices. so that customers ‘postures and devices can have behavioral correlation. The gauze-wrapped device insinuates the loss of cultural diversity caused by a single political logic.

The color consistency of large area wall and ground integration is the embodiment of the cultural orientation strategy and commercial aggression of the place. The spatial dominant color material refined by the color of Chinese tea ceramic, `Purple Sand' is almost the only obscure oriental symbolic expression in this case. The contemporary superimposed color elements of the wall structures created a unique influence on the surrounding business environment. In the traditional business environment with black and white wood as the mainstream color, the "purple sand" color from the east has become a style that passers-by cannot ignore and greatly increase the rate of passenger entering the store.

Shelf and prop design is based on the global versatility of materials and construction costs in different regions. The universal profile 40X30mmU steel with 60X80mmU steel is designed to be easy to assemble by the docking point structure. Profile performance is sufficient to withstand cargo loading weights greater than 500 kg/m.

Profiled construction and transparency of the custom-made dressing mirror become the focus point of circulation line in the thick purple sand color environment.

The non-matrix shelf arrangement forms a flexible circulation line.The business dynamics strategy that runs through the UR decentralization forms a comprehensive product exhibition relationship in the interior.

Store space on 1Fwith 800 square meters will easily drain customers to 2F that 1500 square meters of commercial space through escalators. The importance of the circulation line in the entire business environment is enhanced by the conversion ladder and the lateral shape of the escalator. At the same time, the cashier on the first floor is placed under the ladder, and through the floodlight box to establish space target points for customers.

The high hollow combined with the vertical moving line enables the effective activation of the second-floor commercial area. The hollow top view is made up of the two-story platform surface. The fierce scale of the interval greatly enhances the spatial interest of different commercial blocks, thereby balancing the balance of the flow of people.

The illuminated wall located deep in the space attracts people into the commercial cold zone by the balanced floodlight, which is based on the phototropism of human beings. In the commercial spatial relationship, it strengthens the influence of different commercial areas by strengthening the spatial depth boundary, and forms drainage nodes for important circulation lines.

The storefront with differentiated colors creates a unique charm in the traditional commercial color community, and thus drives the effective introduction of people.

This case is a cross-cultural context design exploration. The designer tries to construct an extremely abstract metaphysical contemporary oriental through the underlying elements of design techniques, depicting Chinese brands with first-class global vision and pattern. "Scarre" not only controls the complex oriental intentions and cultural concept metaphors in an invisible environment, but also releases enough contemporary commercial attack power. At the same time, the internationalized spatial language and form have also provided a breakthrough interpretation of the modernity of Chinese brands for consumers in different regions and levels. 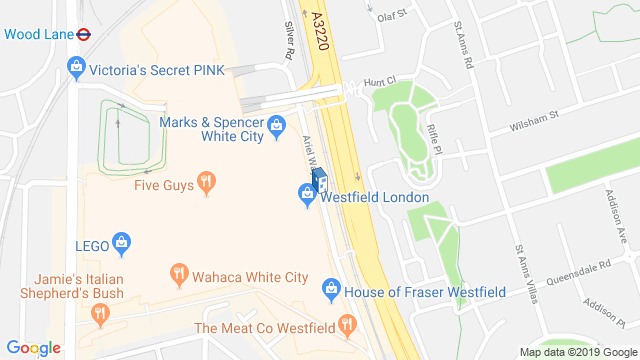 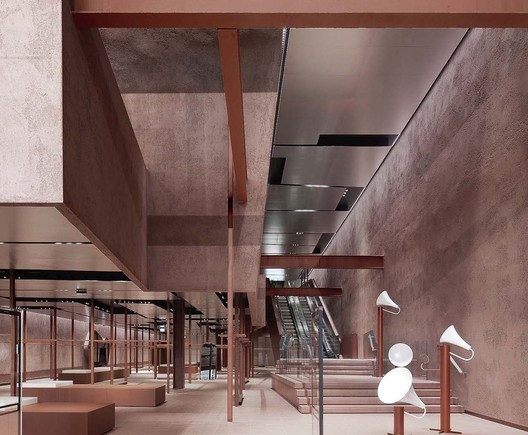