David Chipperfield Architects Berlin has won a design competition for a new headquarters for the Bayerische Versorgungskammer (Bavarian Pensions Fund) in Munich's Bogenhausen district. Designed in collaboration with landscape architects Atelier Loidl, the scheme is to be erected on the former Siemens site at 76 Richard-Strauss-Straße. Prevailing against 11 other submissions, the Chipperfield scheme was praised by the jury for its clear formal language, and highly-flexible floor plans.

The winning scheme features a sculptural ensemble formed of three large volumes. A tall tower along Richard-Strauss-Straße is complemented by a connecting building wing and a lower tower. While the tower along the street front responds to existing high-rise schemes in the immediate context, the open ground floor plan creates a flowing connection to the adjacent park, thus forming a complimentary vertical and horizontal program.

The delicate structure remains visible through the building’s fully glazed façade, creating an intriguing sense of depth while maintaining a visual connection between the interior and surrounding landscape. Indeed, the jury noted that a crucial factor in Chipperfield’s success was the urban planning and use of landscape to integrate the building with its surroundings. 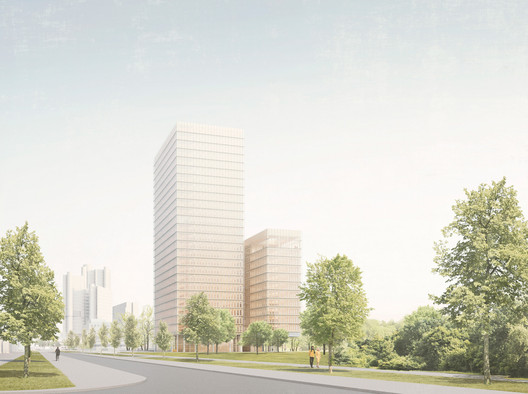