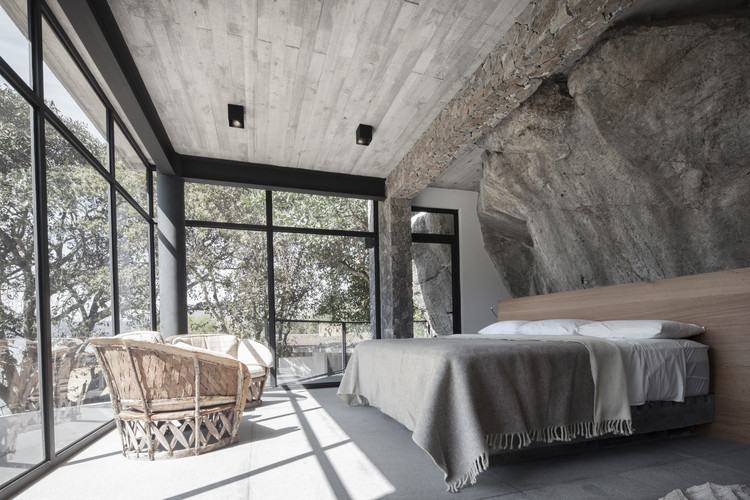 Text description provided by the architects. To properly contextualize a new work is of utmost importance, especially in interventions of existing projects, in cases of renovations and/or extensions. In a certain way, the natural context in which they are situated is already influenced, as an intrinsic part of the environment.

La Peña, an extension of a house, is intended to contemplate the environment in which it is located. On one hand, the shape of the terrace responds to the topography of the garden and through the use of natural materials, it seems to mimic the natural environment and become part of it. Functionally, this "topographic architecture" activates this part of the terrain, which was underutilized, bringing the user closer to the lake.

The terrace is divided into three platforms that relate to the levels of the terrain and the use of each one of them. On the first one we located a dining area; the second one functions as a resting space and on the last one there is a fire pit and a jacuzzi. The three platforms are directly related to one another, that is, a person who is located on one of them can be cohabiting with another person who is on the next platform.

The other part of the project, a suite that arises from the client's need, whose location was chosen based on the lake view and its solar orientation, was made with the apparent materials that already surrounded the house, preserving the existing architecture intact. With its conception it became a tribute to the environment of the house, finishing the access directly with a rock, which is framed with two new stone walls. Likewise, to emphasize the interaction with the natural environment, we use the existing rock as a bench in the shower, using it as a fundamental element, being visible from all spaces within the new bungalow.

During the construction process, we discovered the existence of a large rock that we were able to use as a back wall of the bedroom, emphasizing our interest in giving natural elements a function. At the same time, it is a good example of one of the most important characteristics of the architecture of Método: The aesthetics of our architecture is based on showing the function of the building, in other words, an element that has a spatial or structural function can at the same time be a decorative element.