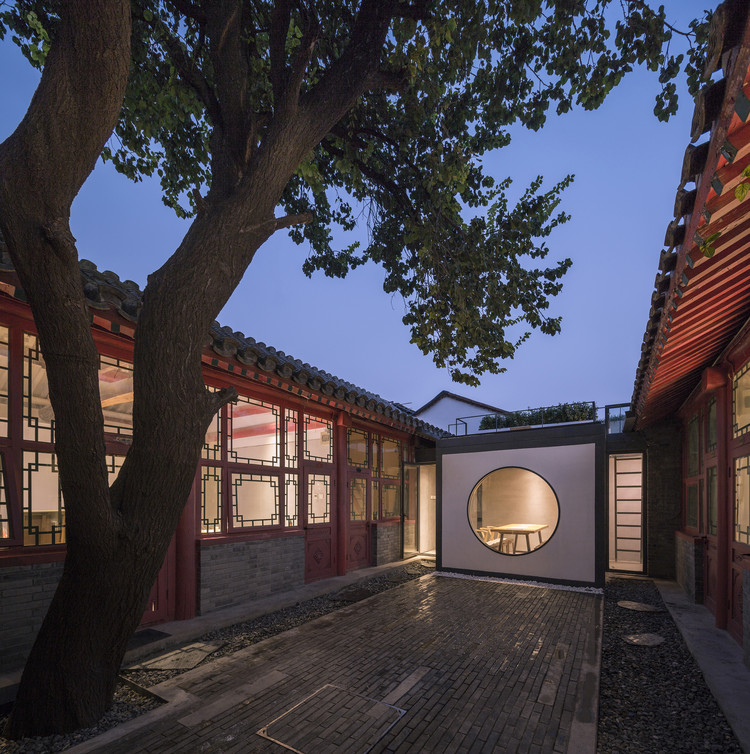 Text description provided by the architects. The project is located at Caochang North Lane, adjacent to the Bell and Drum Tower. Before the renovation, it was a Hutong homestay about to be abandoned, with 7 rooms of different styles and a slightly busy courtyard. With a very limited renovation budget, the architects proposed a strategy of “micro-intervention”, trying to realize the renewal of the quadrangle courtyard with a smaller action and a lower cost.

During the process of renovation, only a small portion of the house was demolished: the dilapidated narrow east room, the two partition walls of the south and north room and the toilet. Three boxes were added. One was added in the courtyard as a tea room and the other two were integrated into the north and south rooms as an open office and a multi-function room. The rest three rooms, one kitchen, and two guest rooms were basically kept in the original layout with one guest room converted into a small tea room and meeting room and the other retained as a staff lounge.

The idea of the tea house comes from the contemplation on “time” on the site. The architect intends to connect the apricot tree, the tea house, and the sun to explore the changes brought by "time" to this site. The distance between the tree and the tea house is 6 meters. The crown radius of the tree is 5 to 6 meters and the tree is 13-meter high. The movement of the sun throughout a day projects the shadows of a tree in the courtyard, which comes through the round window of the tea house in the afternoon, reflecting sparkling lights on the table.  A sense of serenity is emerged in the room as the light enters, which reaches a climax in the lights and shadows around 3 to 4 in the afternoon.

The steel structure is used for the new tea house. With the structural members exposed, it emphasizes the relationship of the lines in the space and echoes the wooden structure of the original building. The terrace railing is reduced in height to allow the tea drinkers to get themselves hidden inside the gables and involved in the environment. The double-layer space of the tea house not only deepens the communication between man and the apricot tree so as to create different experience about tea drinking but also connects with the city by overlooking the Bell and Drum tower from the terrace.

The courtyard is built of black bricks and arranged along the east-west direction. With the strips of concrete embedded between the black bricks, the horizontal pattern widens the width of the narrow courtyard. The black bricks and black stones correspond with the overall gray tone, leaving the white front wall of the tea house alone to receive the light and shadow of the apricot tree. As the interior roof of the north and south houses retains the original material, the new and the old are separated by the aluminum groove, making a continuous line to separate the texture between the upper and lower as well as the new and the old. 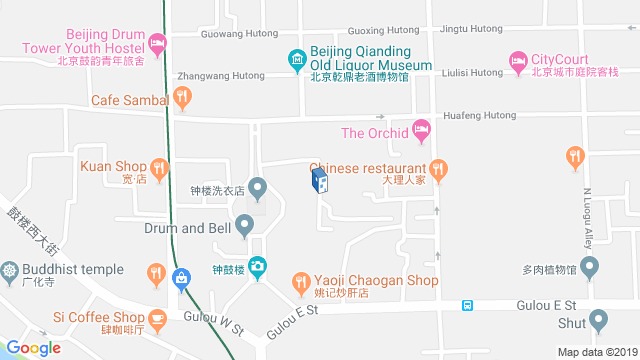 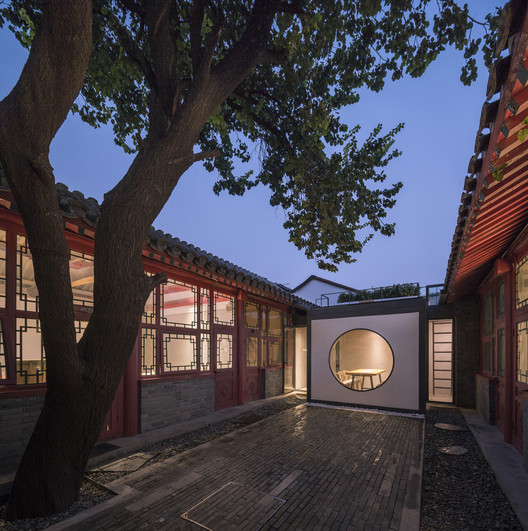