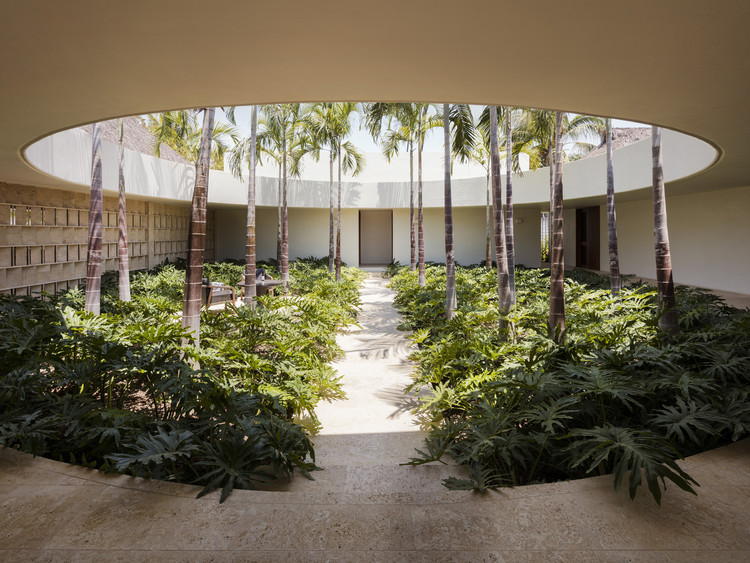 Text description provided by the architects. TM House is located in the state of Colima, Mexico, within a lot of regular topography and geometry, and a surface of 11,670 sq. m. The project consists of a 769 sq. m. single story residence for a family of 4 members. The premise of the project was to integrate the diverse phenomenologies inspired on the tropical paradise of the Mexican pacific, in order to create a residence that constantly refers to unending vacation.

Three key aspects were turning points for the conception of the architecture: climate, topography, and context.

With average temperatures of 25°C, ascending up to 50°C, and with a relative humidity seldom dropping beneath 75%, heat was a major concern.

The land, originally a palm grove, once clean turned out highly profitable in terms of a flat topography with only a few palm trees standing in it. At the same time, an almost inexistent slope made the land susceptible to floods especially during rainy season.

On another hand, the context forces architecture to become introverted and massive as to protect the user from situations of recurring insecurity.

These three elements set the guidelines for the purpose of the project’s architecture.

One very specific type of architecture was chosen that rescues an important aspect of Mexican constructive tradition: the ambivalence between interiors and exteriors. The limits of spaces are blurred to favor the creation of open environments that allow natural air fluxes throughout the entire home.

Thus, the scheme emerges from a program open to the exterior and segmented in blocks that permit such wind passages. A circular patio becomes the flashpoint of ventilations redirecting the airflow from spaces integrated with the terrace towards the sleeping areas. Each block contains a specific use that may be clustered with others or separated always keeping a relation with the exterior.

A 3 ft. platform raises the main floor level from the ground protecting the house against recurring floods. This difference of level between the interior and exterior was used to create sloped gardens that work as thermal buffer zones.

The composite roof consisted of concrete sloped slabs lightened by polystyrene blocks with a palapa system on top that reduces the absorption of solar radiation and contributes to thermal insulation.

Aesthetically, local workmanship contributed to define the character of the home in elements such as handcrafted finishes in walls, roofs and lattices. These combined with a contemporary design generate the overall sensation of authenticity and sophistication; a first home intended to be lived as a second one. 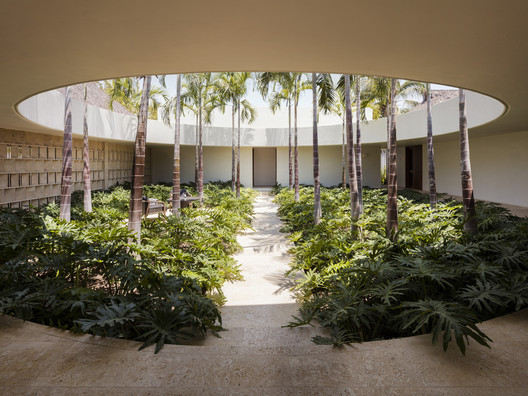