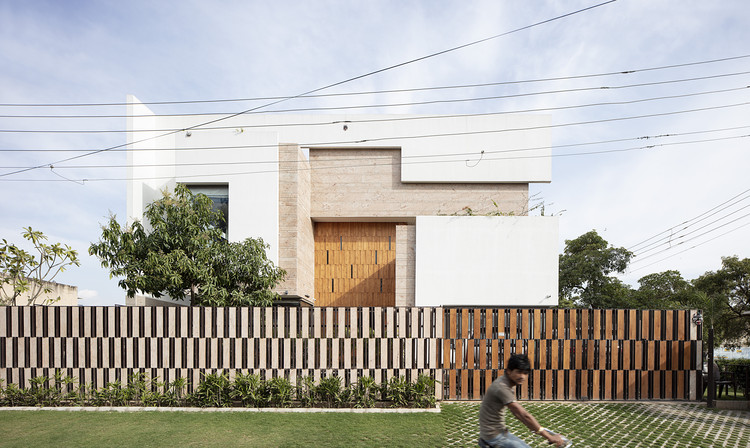 Text description provided by the architects. To design a house for a 3-generation joint family. The concept was devised as a juxtaposition of 4 layered boxes with a parasol roof covering the space in between. This space transpired into a series of central volumes of the house, connected to each other in section.

The plan was organized in a way that the northern side of the site was utilized as a water body and courtyard that overlooked the main public space of the house.

The ground level housed the oldest generation's master bedroom, a guest room, kitchen etc. along with the public areas.

The puja was placed at the central vertical axis directly opposite the entrance. The entrance was through a double height wooden screen where the main doors were a combination of multiple shutters there by allowing varied opening sizes depending on the use.

The interconnecting volumes allowed for a connection between the various generations & also lent a grandeur to the interior space since the cross axes became free in the section.

The house is designed as a strong response to the extreme climate of Chandigarh since the large glass openings are only oriented to the northern side while the openings to the southern and western side are shaded by deep overhangs and vertical shading devices. Two terrace gardens on the second & third level reduce the heat gain from the roof.