Noor Art & Architecture Studio has completed a digital reconstruction of the Ayine Khaneh Palace of Isfahan, Iran. The project is led by architect Mohammad Yazdi Rad. Based on historic plans and written documents, the project visualizes one of the most important buildings in the city. In 1891, the palace was destroyed by Zello Soltan, governor of Isfahan. The reconstruction was made to create a cultural structure that brings awareness to Safavid era building and Persian architecture. 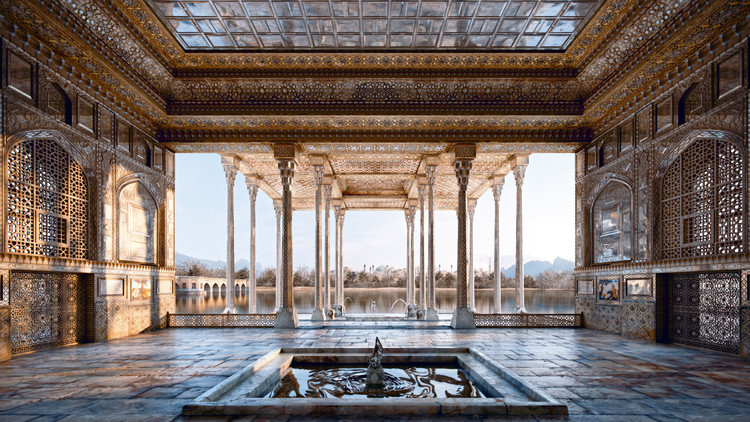 As an important historical city in Iran, Isfahan was chosen as the capital of the Safavid dynasty of Persia. During this time, great building projects were created, including palaces, bridges, and mosques. The Ayine Khaneh Palace was at the heart of this construction. It was located in the southern shore of the Zayandehrood river in a garden called Saa'dat Abad, which was built in Shah Saö and Shah Abbas II era, in the 16th century.

The reconstruction project was created around three historic resources: first, pictorial documents, like the sketches and plans drawn by the French architects Eugene Flandin and Pascal Coste in 1840, and the photographs taken by the German telegraphist and photographer Ernst Hoeltzer before the destruction of the palace. Second, written descriptions were used from the Persian and European historians and tourists like Mirza Tahvildar, Jean Chardin, and Engelbert Kaempfer. Finally, the team used the revision of other pavilions built at the same time like Chehel Sotoun palace, Ali Ghapou, Hasht Behesht, and Ashraf Hall.

Based on historians' descriptions, the palace was similar to Chehel Sotoun Palace. The Mirror Palace had a porch with 18 columns connected to a hall. The walls were decorated with mirrors and paintings, and the project featured the use of marble. In the central part of the porch, there was a marble pool with fountains spouting from the mouths of four stone lions. The palace remained standing until the 19th century. 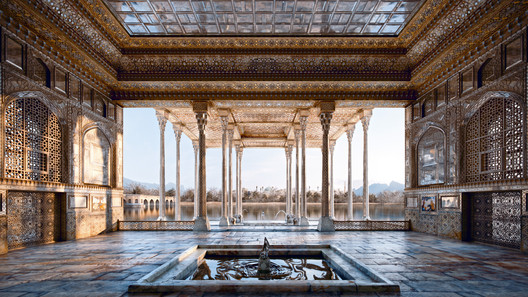