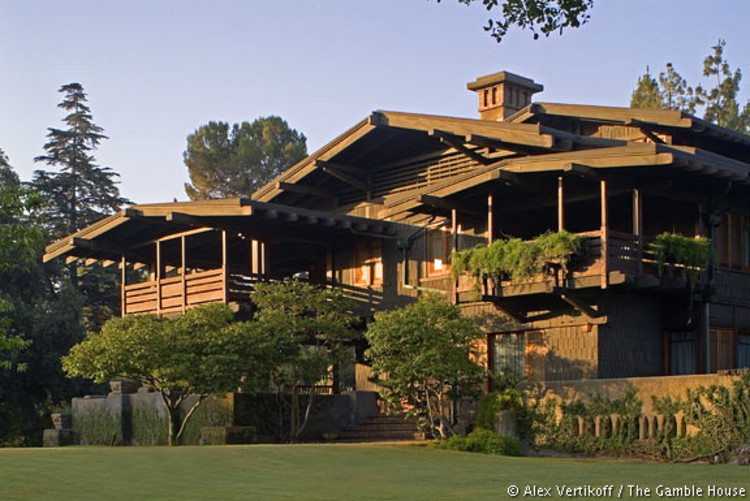 Text description provided by the architects. The essential nature of architecture by Greene & Greene begins with intense attention to detail and craftsmanship, as their bungalows mark the height of the American Arts and Crafts style. The brothers were inspired by the concept of total design, or gesamtkunstwerk, which was stressed in the German-designed rooms at the 1904 Louisiana Purchase International Exposition in St. Louis. When they met David and Mary Gamble, they already had developed a list of rich couples who commissioned them to design their houses, with generous budgets and relatively free reign.

"An architect is a builder employing the process of art," Charles Greene once wrote. This is proven to be their governing belief, not only in the final product but also throughout the process. The brothers were known to veer from the initial blueprints, showing that they were enthralled with transition and process, the blueprints as a point of departure rather than a set of instructions.

The drawings of the house were completed in February of 1908, the site ground-broken in March, and ten months later the house was completed and the first custom-built piece of furniture delivered. The family moved in immediately, and the house and all of it's specially-designed furnishings were officially finished in 1910.

The early projects of Greene and Greene reflected the traditional tastes of their clients, but in time they achieved recognition for developing the California bungalow to a high art, as well as for creating houses with the quality of fine furniture. The Gamble House represented an American-style which sat amidst an abundance of imitations and interpretations of classical European buildings, the influence for many mansions at the time. It was designed to be very suitable for the southern California climate, with a sleeping porch and beautiful transition spaces from the inside to outdoor patios, a garden and a pond.

The developed style of Greene and Greene is very distinguishable in the design world, as their Japanese inspirations are incorporated into stain glass windows, details carved and formed with wood, joinery and joint pieces traditional to architecture in Japan. The emphasis on the horizontal line, the use of modular units, a taste for the asymmetrical, the absence of clutter, extensive areas of unpainted wood, a preponderance of natural and subdued colors, a close relationship with the outdoors were all key elements of Japanese architecture that are incorporated into the Craftsman style.

The strong ties to the outdoors are brought to the interior as well, through flowers and trees which are engraved in the windows, doors and lanterns. Indigenous Japanese shapes appear throughout the house, in the contour of the dining room table, the cloud lift in the transom bar of each window, the recessed handles on drawers and the ebony frame of the master bedroom furniture.

There are also European inspired aspects to the design; the cantilevered second story over the front terrace, window boxes and shingles on exterior walls, the long roof lines and Swiss-like exterior elevation south of the front door, the living room inglenook, and the Gothic fireplace in the den.

The original patrons lived in the house until death, and it was continually passed down through the Gamble family until 1966, when it was almost sold to a family who intended to paint the interior teak and mahogany woodwork white. They immediately realized the artistic and architectural importance of this home and deeded it to the city of Pasadena in a joint agreement with the University of Southern California Department of Architecture. Tours are offered now, as the Gamble House is both a museum and a National Historic Landmark.