Save
Pump House / Design and Research Institute of Shanghai Construction No.7 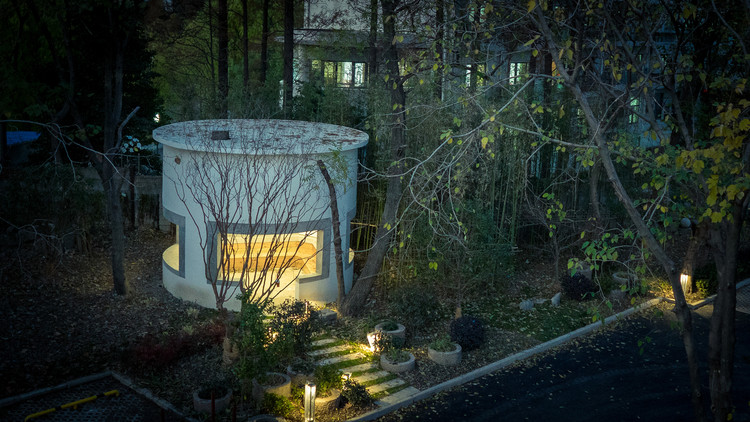 Text description provided by the architects. Gazebo was originally a pump house of the state-owned marble factory. As time goes by, the marble factory has been abandoned for a long time, and with the development of the city, the pump house has become a bustling urban area.

The pump house is located at the northwest corner of the site, and the tall metasequoia forest densely planted on the northeast side and the climbing vines covered on the broken outer wall cover the sun for the pump house. The indoor temperature in summer is about five to six degrees lower than the outdoor. it is a great place to relax in the office park.

Interior space of the original pump room is relatively closed, and the façade has only two small windows for lights and ventilation. “Gazebo” means people can stop and rest. In order to adapt to the new function as a gazebo.  Under the premise of retaining vertical force transmission members, we opened the facade maximally. We inserted three flat long windows into the facade. it makes the interior space and exterior landscape be combined, then the feeling of gazebo has been created. A door window was inserted into the southern facade.

The lowered window hole extends the sight to the depths of the jungle. The upper brick wall has been white painted after the original decoration had been removed, So the original material texture is revealed clearly. At the same time, the towering indoor space and the low level band-shaped opening form. Spatial contrast in vertical and horizontal directions.

The warm color wall washers are installed on the four brick columns to light the upper part, so that the texture of the brick wall is fully displayed. At the same time, the lighting fixtures are not directly seen from the outside, and the lighting effect is softer.

The low window hole also allows the building to retain a large number of solid walls, thus retaining the sense of volume of the original building. So that after the renovation is completed, the building can still retain the rough and stocky style of the previous pumping station. “Minimumly disturb the original silent atmosphere" is our finalgoals .

The original pump house is a one floor brick-concrete mixed structural building. In order to form the "Gazebo" intention, the original vertical force-transmitting member (original brick wall) is greatly weakened after four enlarged window holeswas inserted. In order to continuously transfer the load of the upper wall and the reinforced concrete roof panel to the foundation, the four window holes are designed as a reinforced concrete rigid frame composed of structural columns and cross beams, so that the vertical force transmission system can be continuous.

The arc-shaped cross beam has an outward overturning moment with respect to the line connecting the two supporting points. In order to make the structure more reasonable, the concrete slab is extended from the bottom of the cross beam toward inner space. This slab can balance the overturning moment, and at the same time, four deep windows hole has been created to shade sunshine and proof rainwater.A 15mm wide  drainage groove is reserved on the concrete windowsill, and a rainwater pipe is hide under the windowsill.

After the long time of disrepair, this time we repainted the original brick wall façade, on the hand, the newly reinforced concrete structure system are made of exposed concrete, so that the retained part and the newly inserted part are visible at a glance. And at the same time, the relation of orginal and new structure system is clearly revealed.

Summary: In this renovation project, under the premise of satisfying the new function of gazebo, we try to use the most simple and restraint method and the appropriate scale and proportion to retain the characteristics of the original building and the quiet atmosphere of original site.

During the construction process, the vines on the outer wall were destroyed, but now, some new creepers had climbed onto the wall again.  We hope the facade can be recovered by creepers and the traces of the renovation can't be seen as the summer comes again. 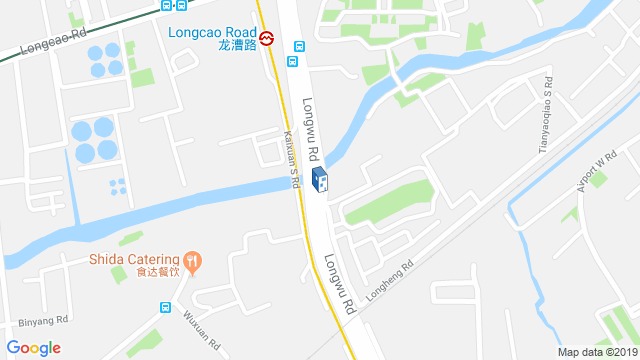 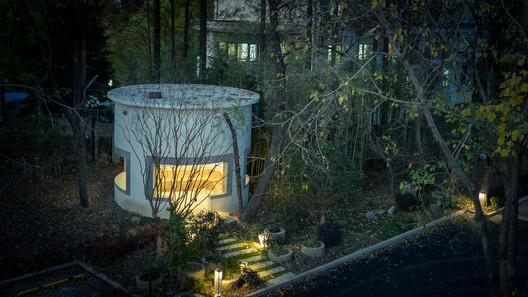