“The Dragon of Tarapacá,” a new project for Museo Antropológico Regional de Iquique (Regional Museum of Iquique) that will overlook Playa Huayquique, is moving forward with the design presented by Daniel Libeskind. The proposal comes after extensive work that began in December of last year, when the American-born architect visited Chile to familiarize himself with the the project, originally proposed by Mauricio Soria Macchiavello, the local mayor.

The first inklings of the project started almost 30 years ago, as the city sought to optimize the spaces along the coastline, allowing residents better access to the sea and optimizing the community's public spaces.

The 3,760 meter structure is designed as an extension of the dune that it's built upon. Three parallel vertical walls will house the principal space and include a garden through the Avenida Tirana sector that will serve as the building's entrance, complimenting the already existing green space of the Sendero Park.

"Every element of the structure draws inspiration from the surrounding landscape, such as the dune, the mountain, the desert, and the ocean, and comes together in a silent musical composition of proportion, materiality, and light." -Daniel Libeskind during video conference.

The exposition spaces will extend throughout the length of the building and its two levels, ending in a vertical space with a wall of mirrors that will reflect the cliff and the dune. The project includes educational spaces, lecture halls, and a room for theater performances and events.

Now, mayor Mauricio Soria indicates that the municipality will take charge of the project's management, but that only with the cooperation of both the public and private sector, with the next steps, namely the architecture and engineering, coming to fruition. 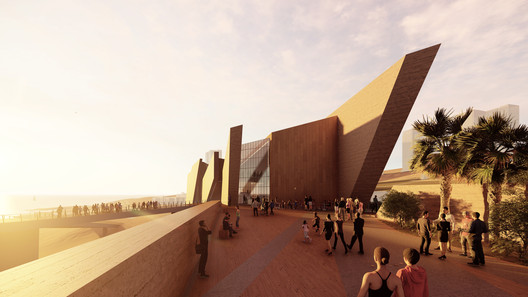