Faced with the challenge of designing housing units for rural areas south of the city of Bogotá, Sociedad Colombiana de Arquitectos (Colombian Society of Architects) called upon a participation of proposals with technical and spatial solutions, not only allowing the development of viable forms of productivity and growth, but also applying criteria of sustainability, efficiency and comfort.

Considering the adaptability of this architecture of the unity to the terrains situated in three varying geographies and characterised by an Andean landscape, the jury granted the first price to the team of FP Arquitectura and the second prize to Espacio Colectivo Arquitectos + Estación Espacial Arquitectos. Get to know the latter project in detail below, described by the authors.

The outlook on rural housing as an architectural solution is nonexistent today, apart from private initiatives extracting ideas from the academies and other entities that promote the topic, the projects of housing built in rural territories are devoid of all dignity.

Housing in vulnerable areas, mass-produced materials without thermal solutions, inconsistent access to electricity and improvised sanitary solutions are some of the problems that the farmers face in their daily life. This leads to the consequence that when speaking of rurality we immediately have the idea of poverty and lack of opportunities, which has triggered the migration from the countryside to the city and the abandonment of productive agricultural and forestry activities essential for supporting families.

Approximately 75% of the Bogotá territory is rural, bordering the Sumapaz moors, according to the characterisation of the capital´s soils by the District. This territory is equivalent to 166.000 rural hectares, and of these only 35.000 are suitable for agricultural activities. The rest were declared as protected, where the exploitation of the soil for agriculture is prohibited.

This scenario opens up the opportunity to rethink rural housing in Bogotá, with the idea of the resilient habitat as a starting point, meaning housing that as a principal adapts and overcomes the mentioned adversities producing its own food, heating its interior, growing together with its inhabitants, respecting the vernacular architectural and spatial traditions and permitting it to be part of the community.

As a conceptual strategy, we propose the union between heat/energy generation and the habitable structure, a Thermal Roof.

A greenhouse is not only a sealed spatial structure covered with transparent materials but also a covered courtyard for rainy seasons, a place to produce food and protect it from the cold, a family and community meeting space and a thermal device that heats a housing in a secure and efficient way.

We also believe that a Roof is a habitable structure, a place, a spatial surface that protects from inclement weather, it is what the people demand in the streets, an essential element when we think of housing. Apart from being constructed with diverse materials, it represents an eagerness and a desire to live with dignity. A Roof is a primitive element inherent to our ancestral cultures; The Maloca, Ruca, Choza, are all spaces constructed principally as roof-like shelters. The Roof is the spatial cultural essence which we base this project on.

We designed a housing as a thermal cover, that in its interior gives shelter to a relationship between the productive and daily life of the farmer of today.

The proposal is based on the elemental principle of support that permits to construct a livable space covered by two inclined surfaces supported together forming a traction triangle. The steel structure composed of triangular frames forms the volume of the Greenhouse-Housing and solidifies the Roof.

We believe that if we respond to the group of variables with a thermal, adaptable, community-oriented, productive and resilient proposition, we will approach to alleviate the quantitative and, above all, the qualitative deficit of rural housing in Bogotá. 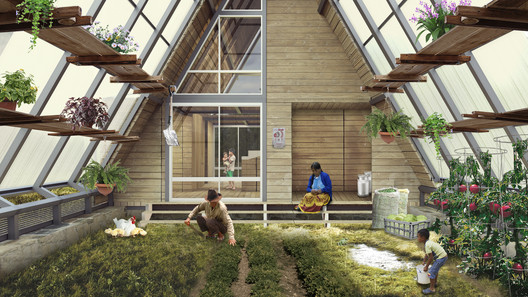