Greek architect Giannis Giannoutsos has created a new chapel design for a small church in western Greece. Sited in Stratos, the project explores the juxtaposition between an existing and a new religious structure in the same space. Rising next to the ruins of a 19th century country church called Asprocclesia, or White Chapel, the design creates a space of introspection and enclosure in the middle of an open field. 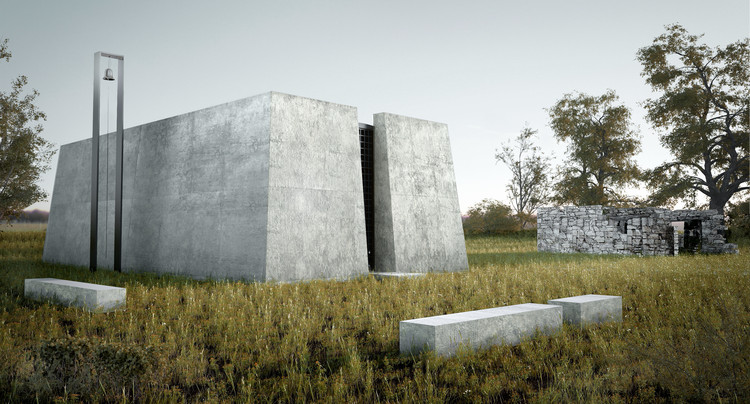 As Giannoutsos has laid out, the new chapel is placed parallel to the old one at a short distance, demarcating a loosely defined courtyard. The layout of the new church duplicates the area of the ruin and emulates its proportions and orientation. The character of the new church is monolithic, where an outer shell protects the inner core; the structure consists of two robust reclining walls and a light vaulted roof sustained in-between. The walls follow a mirrored L-shape configuration, molding the interior.

The roof is kept at a distance from the walls, allowing for two clerestory skylights to illuminate the interior along the perimeter. The only openings are a pair of vertical incisions, at the entrance and behind the sanctuary, highlighting the East-West axis. Selected areas of the walls recede into alcoves; the rest of the inner surface is engraved with religious iconography, without any color. The research looks at how tradition may inform new compositions.