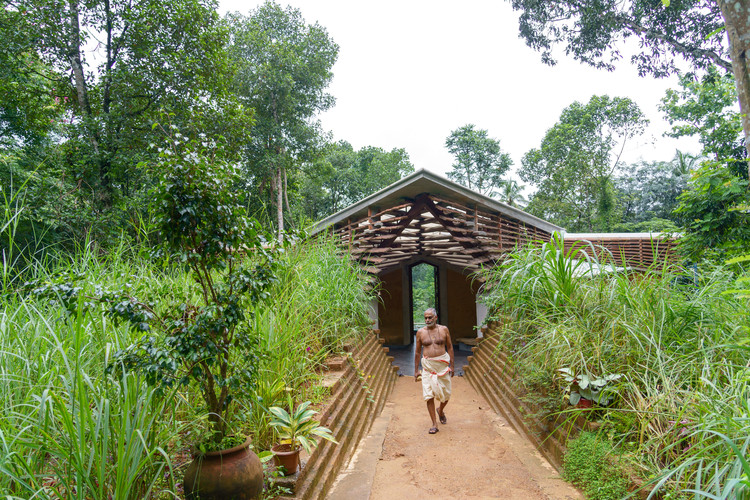 Text description provided by the architects. In today’s world, it is a prevalent trend to add the prefix of sustainability to most things. However, there seems to be very little that is done to represent the concept.

We, as a community, have devoted ourselves to the cause of using Mud and Waste as the chief components to make structures which are alluring and utilitarian. As a firm practicing sustainable architecture exclusively for a decade, we know about the aspirations of a “modern” client, where his house is a symbol of his status and prominence in society instead of being a statement for the future.

When we first met the client, he mentioned to us about his disapproval towards the traditional Kerala style home system. The traditional houses in Kerala are typically sloped roof structures with heavy overhangs. Although the roof prevented rain and the cooling was phenomenal, he was deterred by the atmosphere of darkness which stayed prevalent or was associated with the ambience inside the house. The second altercation was that many of the architectural systems that were in place promoted   gender inequality in the olden days since women were restricted to the courtyard. Thus during the early days of the project, the client had made a point that the house should be a symbol of a new light, or a new outlook to our age old systems and beliefs.

“Chirath” which denotes a traditional lamp in Malayalam is the name given by Mr. Ramanujan Basha for his house at Pala, Kerala. The client, thus asked for a solution by throwing away the bad and utilising the good.

We decided to break the roof, split it open and let the light flow in, all while using waste and mud to build the house. This is the concept of Chirath.

What is waste? Waste can be classified as anything that was produced, used and then discarded from its original function. While the work and construction process results in the production of a lot of scrap, we believe in not being deterred by this demon and instead building with it' 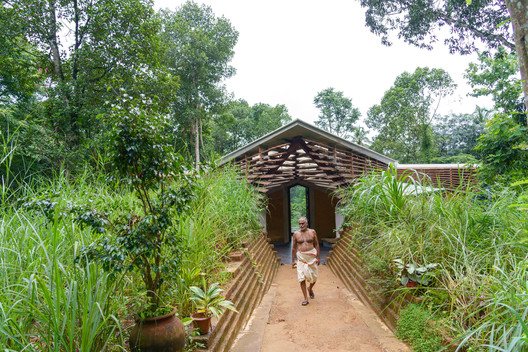