Barkow Leibinger has unveiled details of their competition-winning proposal for the Waterfront Hotel and Boarding House in Molenkopf, Frankfurt am Main, Germany. Located at a prominent site on the city’s Molenspitze, the west-facing triangular point of land sits at the end of an industrial peninsula used for warehouses and container shipping at Frankfurt’s East Bay.

The Barkow Leibinger scheme manifests as a triangular pinwheel with offset corners defined by the depths of hotel rooms. The mass of the 60-meter-tall building is further broken down by a “folded accordion façade” to maximize the panoramic views of the European Central Bank, and Frankfurt skyline attainable from the site. 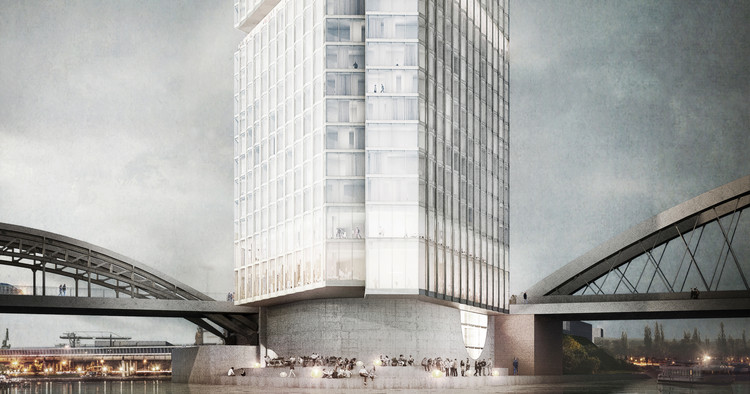 Responding to the site’s condition, bound by two bridges, the façade facing the bridge crossing is folded to provide two entrance addresses: one for the boarding house and one for the hotel. The two programs are divided by an intermediate 12th-floor level, acting as a meeting place, bar, fitness, spa, and conference space. The level is articulated asymmetrically by a column-free open-air loggia facing the west of Frankfurt.

The scheme is organized in a split-level with entrances to the hotel and boarding house sitting above the waterfront “beach club.” Responding to shipping constraints, the building cantilevers at the sides facing the water, and at its prominent leading ship-like corner. Drawing reference from the unbuilt history of the site, the scheme will resemble a lighthouse, “ephemeral and reflective.”

The cantilevered building form also enables curtain wall facades, materially and visually light. Manifesting as shear walls over the core construction, the façade allows for unobstructed views from the interior rooms without structural walls or columns compromising the outlook.