Alphabet-owned Sidewalk Labs is testing a "raincoat" for buildings, a prototype tensile structure that's made to make extreme weather more comfortable. Created as part of the Quayside smart city project in Toronto, the raincoat structure aims to help protect from wind and rain while lowering energy demands on buildings. Designed by Toronto-based RWDI and Partisans, the prototype debuted at Sidewalk's 307 office. Made from a thin plastic membrane, the raincoat will remain up for one year as teams test its performance. 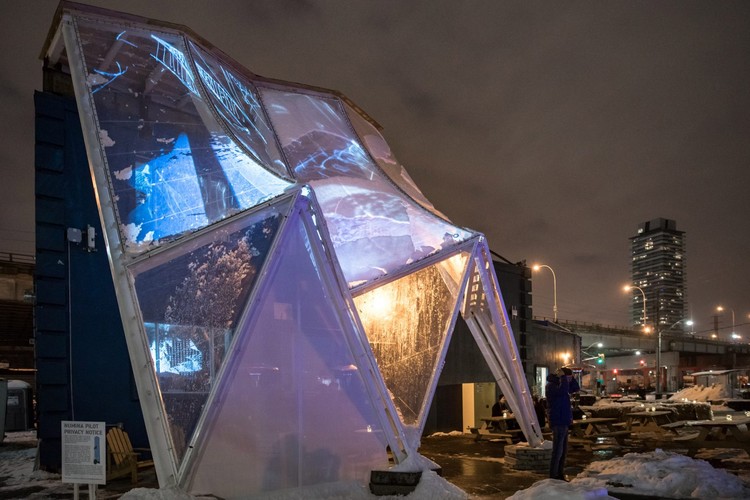 The raincoat structure is designed to work with a range of systems, including interactive projection mapping and hexagonal smart street pavers. According to RWDI’s analysis, the raincoat could potentially double the amount of time people could comfortably spend outside. For the project, Partisans came up with a series of architectural concepts. Then climate engineers at RWDI ran computer simulations that modeled weather in Toronto to further develop the design. Italian firm Maffeis Engineering handled the structural design. "The raincoat was just one of a series of design innovations we'd been exploring to make sidewalks and other public spaces more comfortable, with the goal of drawing people outdoors year-round," said Sidewalk Labs.

Dünn Lightweight Architecture collaborated with the design, construction, and assembly of the "Raincoat buildings" of the SideWalk Labs project. The raincoat is made using ETFE that takes the shape of a series of peaks. These are joined to Sidewalk Labs and the 307 office space. Alongside the raincoat, Sidewalk is also testing their concrete paving system that was developed from modular fiberboard systems. The idea is that the concrete system can absorb stormwater, heat the sidewalk to clear ice or snow, and can be easily replaced because of the modular hexagonal shape. They are made with LED lights to communicate traffic flow or signal changes in street use.

Sidewalk Labs is currently working to developing the Quayside project as a new smart city neighborhood east of Downtown Toronto. 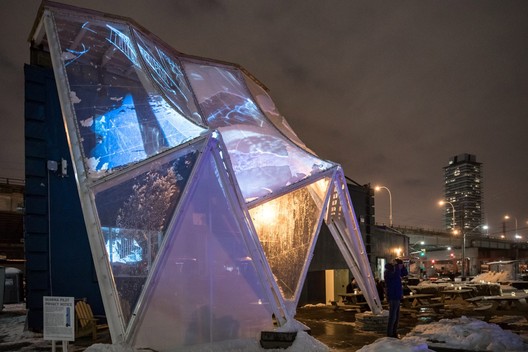