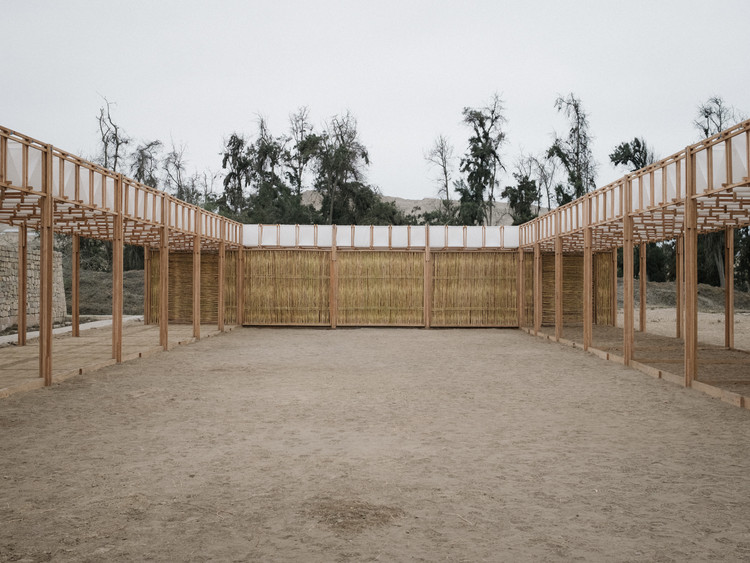 Text description provided by the architects. Today, Pachacámac is one of the most visited archeological site in Peru. The sanctuary is managed by the Ministry of Culture, through the Museum of Pachacámac, an institution that both manages the site as a educational/cultural experience for visitors and as an on-going archaeological site. In 2015 a new complex of buildings by Llosa Cortegana Arquitectos was completed to house the museum and its on-going archaeological work.

The northern two thirds of the site are still yet to be excavated; open land awaiting future studies. But the monumental area of the sanctuary is a significant archaeological site with active excavations and on-going discoveries of artefacts and architectural remains. With the construction of the National Museum of Archaeology (MUNA) underway on an adjacent site, the government aims to restore this territory to its former grandeur by transforming it into a new centrality, embedded within the urban-fabric of Lima.

Yet Pachacámac is currently perceived as a void, a patch of open desert inhabited by ruins, caught between the baffling growth of the capital and the mouth of the Lurin River, the last remaining agricultural valley of the region. Its edges are constantly under the threat of encroachment by informal settlements and land invasions, the latest of which took place as recently as eight years ago.

Description of the Structure
The Room for Archaeologists and Kids, is a timber structure 37m x 16.3m and 3.6m tall, which forms a covered arcade around a courtyard. The structure is made from twenty-eight square fields of 10m2, defined by a column in each corner, and with a lattice-work roof above. The five fields at each short end are enclosed by woven bamboo panels, set vertically, with a concrete floor to provide a robust surface. These rooms contain wooden shelving that offers space for storage and exhibiting archaeological finds, as well as wooden tables that can be brought outside when required.

The revolving doors are made of timber frames filled with bamboo cane elements, laid horizontally and woven around vertical pieces. The doors rest on wooden blocks and can be locked from the outside, to keep the interiors secure.

Outside, along the side nearest to the walls of the Acllawasi, adobe blocks aligned to the walls, and marking an underground channel, form a robust surface for events, where wooden tables can be placed. On the other side, the arcade is filled with earth, to provide a space where archaeological digs can be replicated by visiting school children.

The geometry of the central patios of the Acllawasi inform the orientation of the new courtyard structure, creating an oblique relationship with the stone walls that surround it on two sides.

The columns and foundations were prefabricated and assembled on site. Fields of roof-lattices were individually prefabricated and raised using hoists on moveable temporary works. The joints were made either with stainless-steel bolts (primary joints) or nickel-plated screws (secondary joints).

Lengths of white, polyester open-weave textile commonly used in agricultural greenhouses nearby, were woven in between the upper and lower planes of the latticework, and fixed with staples. The woven canopy provides two or three layers of shade, whilst retaining certain moments of views to the landscape beyond and the sky.

A Collaborative Design and Build Process
The structure was to be designed and built within three weeks.The project began with an intensive design workshop, where the students worked in teams of three over two days. Each team developed ideas that dealt with the structure as a whole, how it would relate to the site, as well as structural and spatial ideas as to how the design could work, and how it could be made. The result was fifteen projects that were presented and discussed as a group. The challenge was how to integrate the best ideas, discoveries and insights produced by the fifteen teams into a single project.

Over the following week, the team formed smaller groups, dividing tasks and responsibilities to begin developing the design for the structure that could be described as an ‘upside-down table’; a rigid assembly of beams and columns anchored in the ground, supporting fields of lattice-work. In short: the roof was to do little more than support its own weight and stay rigid.

Choice of Materials
The principal material of the structure is wood, specifically, sections of kiln-dried Tornillo (cedrelinga cateniformis), a tropical hardwood found in the rainforest in Peru and elsewhere in the Amazonian basin. Tornillo is a wood with extraordinary properties: very dense (555 kg/m3) yet paradoxically extremely flexible. It is recognised as a general-purpose construction wood in South America, especially because it is naturally resistant to fungus and humidity, requiring no chemical treatment. In the persistently humid climate of the Peruvian coast, less resistant timber would begin to rot within months.

All material except for the timber was drawn from the everyday palette of building materials of Peru. Cane, cut and woven in the form of prefabricated esteras (ultimately not used), or woven by us into panels; adobe bricks for the floors, with compacted earth joints; and synthetic open-weave textiles, widely used for making shade, for the canopy. 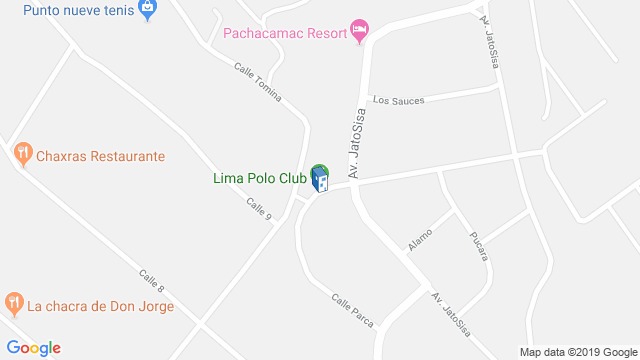 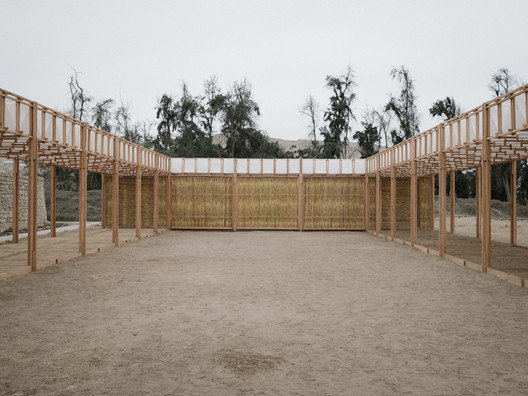 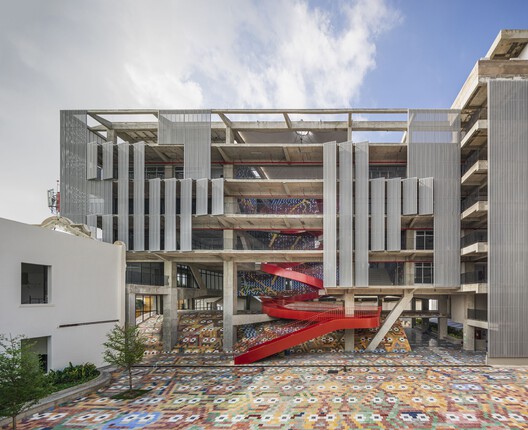