The scheme’s open-plan ground floor develops from an exterior forecourt, thus becoming part of urban space, with integrated ticket offices, cafes, bistros, and a hotel lobby. The hotel, with 310 rooms, is located on the top levels, in the “peak of the dynamic load-bearing structure.”

The opera hall will accommodate 1,500 seats, also functioning as a philharmonic hall thanks to state-of-the-art technology. An extra 1000 seats in the wings and backstage area can be created on hydraulically-extendable grandstands, thus morphing the space between a classical opera stage and a central arena. The scheme’s plinth will host service areas such as deliveries, an opera workshop, and parking for 1,200 cars, as well as shops and restaurants along the promenade.

Under RKW’s proposition, the site of the current opera house on Heinrich-Heine-Allee would be cleared for the construction of a new Photo Museum, so as to combine with the K20 and Kunsthalle to create a new museum quarter. In addition to its museum function, the Photo Museum could serve as a cultural forum to enliven the surrounding area.

The end of the Rhine Embankment Promenade, which was inaugurated 25 years ago and has become a central feature of high-quality life in Dusseldorf, is an excellent location for the construction of a new modern opera house.
-Dieter Schmoll, Managing Partner, RKW Architektur + 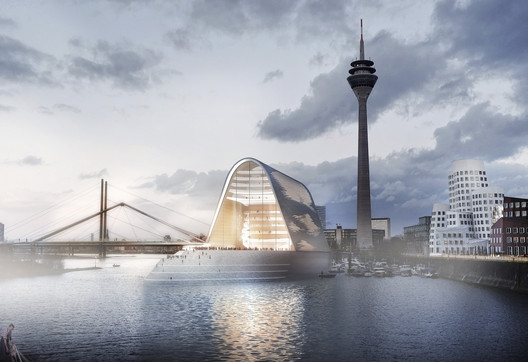