Nike's New York flagship store, primely located on Fifth Avenue, is perhaps the closest thing to a temple in the digital age. At a massive 68,000 square feet, it commands attention and symbolically dwarfs even its skyscraper surroundings. The exterior facade features a grid of undulating glass that casts glimmering shadows both inside and out. Inside, a tractor-beam type installation hangs from the ceiling, giving the space-age flavor. There's no set ritual or tradition like in the temples of old, but sneakerheads might certainly feel they've found their heaven on earth. 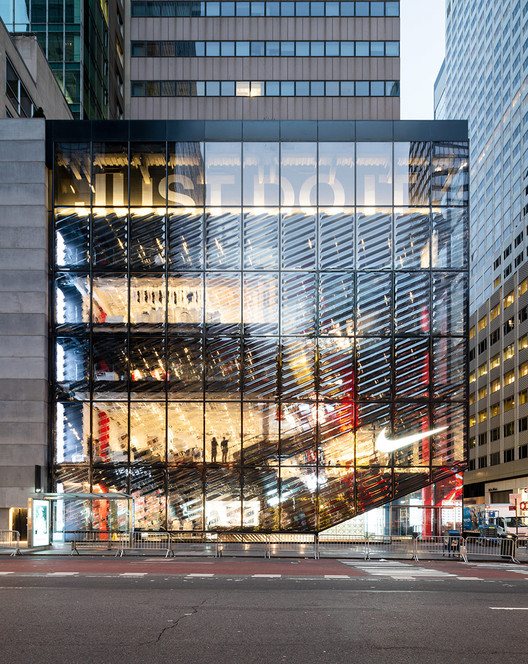 The six-storey building, designed by Nike itself in collaboration with Rockwell Group, Mode Lab, CallisonRTKL, and Heintges Consulting Architects & Engineers, packs a lot into an already large space. The first three floors are divided somewhat conventionally between men, women's and children's apparel; everything is organized in a grid that allows staff to change the entire organization at a moment's notice. It's all fairly standard for retail design (if significantly more high concept and budget); even the "Sneaker Lab" one floor up relies on (admittedly attractive) design tropes to appeal to the hypebeast clientele. The all-white and chrome space is a loving exaltation to footwear, rendering the objects on display a holy status.

But where the space itself is a dressed-up version of ordinary retail design, the 'Nike House of Innovation 000' pushes the boundaries when it comes to the client experience. The typical banks of check out counters are nowhere in sight, replaced instead by roaming employees equipped with mobile card readers. You also won't find security guards or anti-theft tags – trust is the radical concept here.

It remains to be seen whether this high-tech, high-concept, and aggressively futuristic approach to retail that Nike's pushing will be a hit with shoppers. But, says Anna Fixsen in a recent piece for Metropolis Magazine, it's certainly one that stops you in your tracks. Read the full review on Metropolis Magazine here.