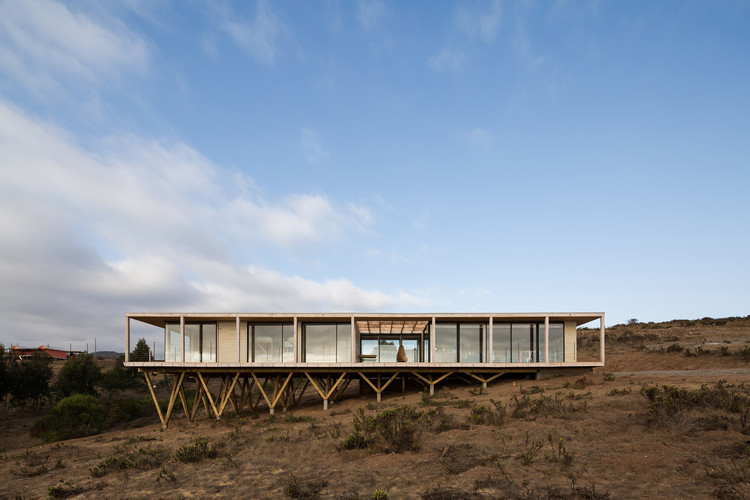 Text description provided by the architects. The dock house is a second home located meters from the coastal área of Pichicuy, in Chile’s V Region.

The architectural concept is guided by the slope of the terrain, as well as by the wish to maintain the ocean’s horizon present throughout all rooms of the house. It was decided that the entire layout should be confined to one level, establishing a relation to the sea’s horizon by way of siting the house against the slope, like a dock.

This push back against the slope bestows visibility to the topography of the terrain, as well as the further-off geography of the coastal shorline, pre-cordillera mountain range and Pacific Ocean.

The project’s architectural floorplan is organized in two areas. One is the living and common areas adjacent to the entrance. The other includes bedrooms and bathrooms. Between them, functioning as an intermediate space with direct communication to the exterior, is a transparent hallway that leads to a deck overlooking the ocean along the northern side of the hill, where an outdoor firepit is shielded from the wind by the terrain.

The entire site is laid out comprehensively from one floor, which increases in height as the terrain falls below it, using diagonal wooden pillars for support.

The house features a south-west façade that is completely open towards the sea. To the north-east, the perimeters are designed to respect the privacy of the site as well as the proper utilization of natural light. This is enhanced by way of a horizontally slatted skylight that runs the entire length of the house.

The wooden structure is proposed as an important part of the house’s overall expression. It is mounted over a structural plinth composed of five axes built of large, master sectional 6x6 inch beams. This structure is illustrated below in the sections on pillars and internal structure of the house.