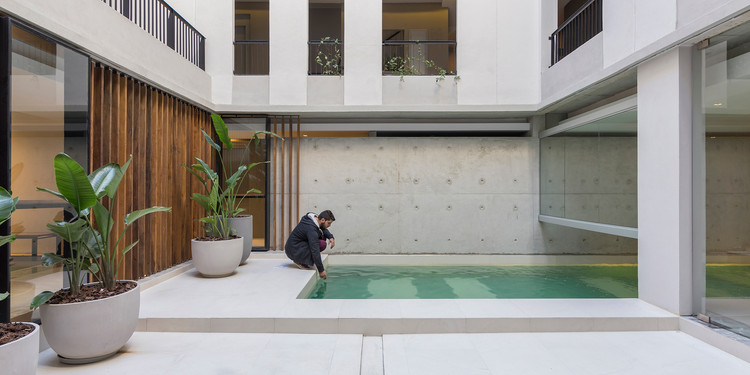 Text description provided by the architects. The design synthesis for the residential building JA1205 arises from the conformation of two building volumes of four levels each, implanted in front and back of the terrain: a triple front lot, in the neighborhood of Palermo, Buenos Aires, Argentina.

The volumes are organized in order to contain a total of thirty-eight units -one, two, three and four romos each-, distributed between the first and fourth floors. The combination of different types of housing starts from the search for the individuality of each dwelling within the group, the idea of ​​owning a home in a collective context. Another project decision is to free the ground floor of the building from homes, which allowed to house two commercial premises responding to the characteristics of the neighborhood, the pedestrian and vehicular accesses and sectors of common use such as swimming pool, gym, sauna and toilets.

The project consolidates the available front, is incorporated into the commercial dynamics and the vitality of the neighborhood on its ground floor and gain scale from the empty and double height of the access. Behind this first block, the collective central patio appears, with the common pool and gym areas that precede the second body.

Both volumes are linked together through a system of semi-covered pedestrian walkways. In this way, a continuous flow of transition between the interior and exterior space is achieved. Likewise, the central vacuum - three patios that meet the lighting and ventilation needs - is related to the urban environment, optimizing the way of inhabiting a contemporary urban dwelling of medium density. The emptiness and the air around things, which is just what gives them their own space and weight. It is not simply a void or the absence of content but rather it is a conscious space, a breath that allows to value the other parts of the work or even create new meanings. This space can not be understood by itself but in relation to its context: the present elements delimit the empty space. In this sense, the understanding of the courtyard allows the simultaneous awareness of the form and of the counterform. The system of addition implicitly involves the system of gradation where each unit transmits information to the next, tensing the vacuum they contain. Llight and darkness, nature and architecture, public and private, home and city, one world and another, are opposites that dissolve to create a gradual and continuous system.

The large central courtyard is the element that structures the whole, which forms a "neighborhood" of 38 individual and singular housing units, different from each other, around a common courtyard that functions both as an atrium. The internal spatiality of the three courtyards contributes to the creation of a landscape of their own. Access to each home is made through a pleasant, bright and spatial route, often allowing contact with neighbors and replacing the typical closed core with open vertical and horizontal circulations, allowing multiple and changing visuals. The alternation of plants of different types gives a changing dynamism to this space. The variety of departments accepts less standardized and more changing life forms, as well as a new coexistence of different types of family groups.

The units of the set are - according to the image that was conceptualized in the search of a contemporary dwelling - synthetic and of purified characteristics. Some have the proper value of the balcony-terrace as an element of direct expansion into the urban space; others do it through patios or terraces. This idea of ​​expansion is characteristic of the project and is consolidated through the incorporation of green terraces and private pools on the terraces.

It is found in asymmetry and inequality, the path to order. In the design of the facades the minimum dimensions and odd numbers are the reflection of a nature that is precisely perfect in its imperfection. And it is precisely through these simple lines, as architecture is able to suggest and not reveal, to give an air of mystery to everything that is not evident. The work invites to be discovered through a design full of balance that transmits tranquility and silence, in which the absence of the unnecessary predominates. 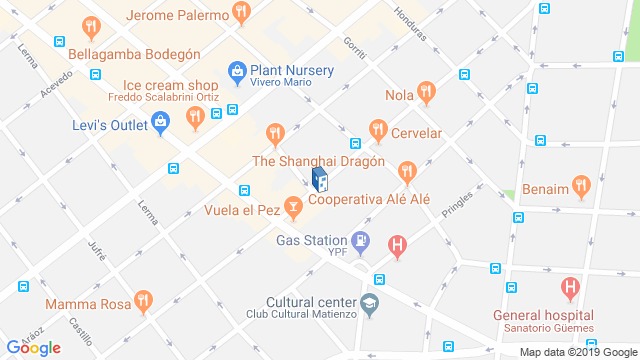 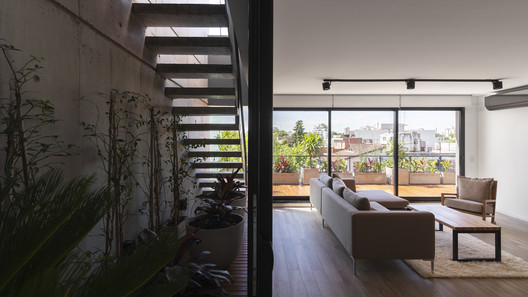