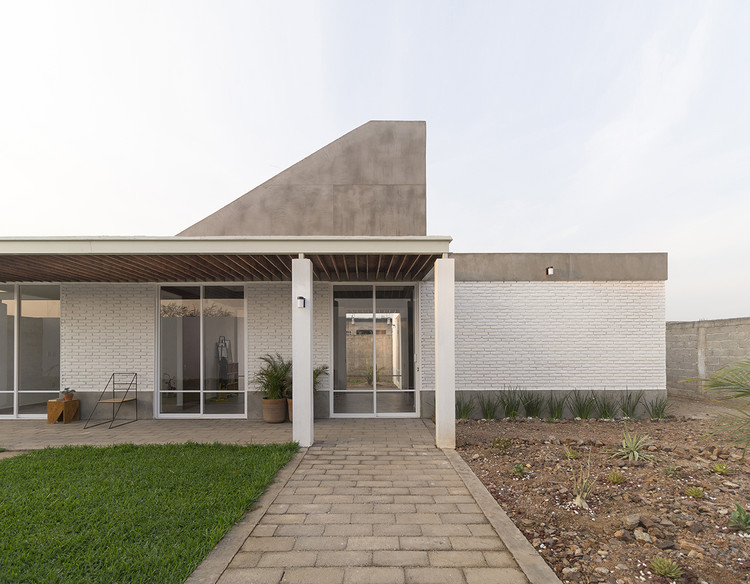 "The container inside the container" both play an important role in the project, one can not be without the other and the spatial difference between them generates the required environment to provide amenity to the privacy of the users.

A concept of housing that goes from introspection to perceptive amplitude, which takes advantage of the environment, but without dismantling it to the outside; the spatial distribution of each zone allows a metabolic program, this means that the project was not 100% built and a second stage will be built, without detracting from the essence of the concept.

Exterior-transition-interior is the strategy that isolates solar heat incidence, in which the corridor is a spatial buffer between the garden and the habitable zone. The corridor (transition) is where things happen mostly for the user; rest, recreation, fun and reflection are executed without distinction or schedule.

The social zone emerges purposely on its roof to absorb, sift and distribute natural light from the zenith. At the same time, it lets out the hot air of the humid Oaxacan summer, with its ventilation traps. The kitchen is dramatized with a change of textures and becomes intimate with its wood and dark covers, ideal for entertaining talks that the user requested from the project.

A second corridor, this time without longitudinal deployments, but if more intimate than the first one, is maintained to house the second bedroom, it can be intuited that it is not a corridor for visits, but for the smallest users of the house.

102 m2 built contained in 480 m2 of container generate 378 m2 of green area. This proportion is favorable for a family that wants to spend their weekends in contact with nature, from their own home.