Text description provided by the architects. On the central area and practically linked to the Arroyo La Cañada, there is a land of 9 x 16 meters to solve a small urban refuge. The intervention bets on the renovation of the existing fabric, in one of the many urban residual spaces that we find in the city. With the objective of making its small contribution in stopping the constant expansion of the city, it takes advantage of the current services and infrastructures, improving and adding value on the built heritage.

The project starts from an existing spatial structure that practically covered the entire land. Starting from the action of beginning to undermine the mass, the patios that structure the layout are defined, where the trace of the pre - existence manifests itself spatially through the scale taken by the ground floor.

With the intention of optimizing the bounded surface of the plot, the proposal takes on vertical meaning by organizing the program in 3 overlapping levels. Basically, a free ground floor is proposed, tensioned between 2 patios, which allows the "architecture study" work space to be set up, favoring cross ventilation and full lighting without the incidence of direct sunlight. In this way, a package of services consisting of a kitchen, bathroom and storage area is defined on one of the edges, allowing the workspace to operate independently.

On the 1st level the social area is developed in an integrated space of living, kitchen, dining room and terrace opening fully to the north. It is proposed in a mezzanine of double height the private area as an open bedroom with the possibility that in the future the vacuum can be covered contemplating a growth implosively for more rooms.

The proposal is materialized with 2 constructive logics. The lower level is solved in traditional construction providing the pre-existing structure by incorporating 2 exposed reinforced concrete beams that receive the loads from the upper box resulting in dry route. A very simple machine is formed to make the cuts to the ceramic brick, reducing its depth and allowing the passage of the sun through them.

The entire perimeter of the land is materialized with "ceramic brick" which is cut into 3 parts in order to optimize the material and make up a 7.80m high and 11 cm thick screen that defines the expression of the proposal , resolves security conditions, gives privacy and builds inside a high quality spatial atmosphere. 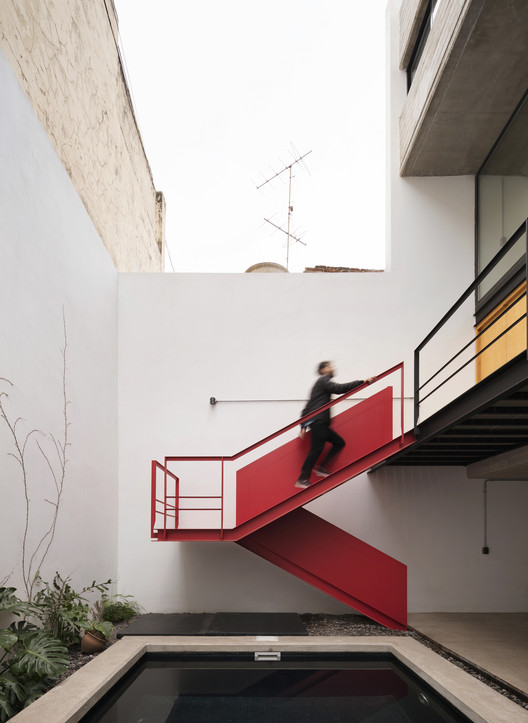