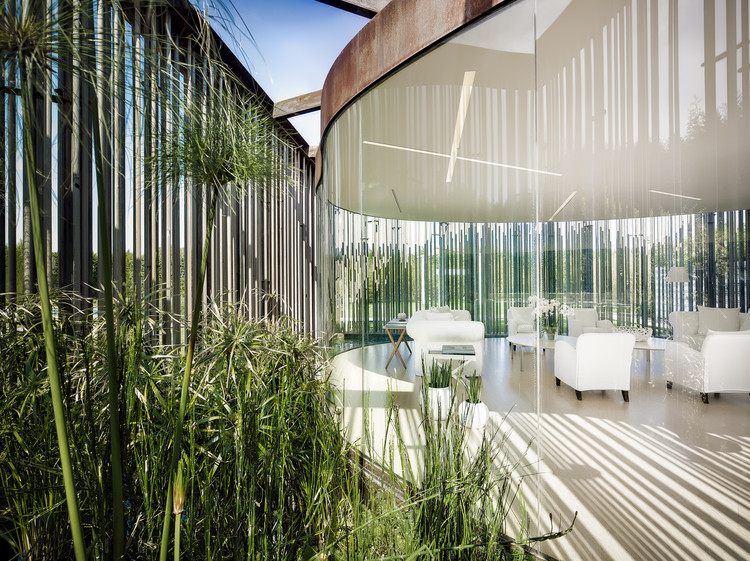 Text description provided by the architects. Turning a country house, lost in the Agro di Casarano from an anonymous building without quality in a meeting place between art and architecture was not a recent request. It would have been much simpler to demolish the existing one and redesign the whole lot from scratch, instead we chose not to make a clean sweep, but rather to accept the actual state as a starting point: the old factory building is It was wrapped in a new wrapping, a white wooden lining that redefines the volume, unifying it, and redraws the score of the facades.

In some places the lining is detached from the house and becomes a fence. The house houses an important collection of works by the Japanese artist Hidetoshi Nagasawa.Their installation, both inside the building and in the garden, is an integral and foundational part of the concept of domestic space. Once crossed the threshold of the internal enclosure, the discovery resumes in the succession of private gardens, which are an integral part of the interior space.

Each room in the house corresponds to one of these small, communicating but visually separate gardens, so that each room has its natural continuation outside, without affecting its exclusivity and privacy. Each garden has its own precise connotation of color and smell: the plants that reside in each of them have similar colors, but bloom and perfume the air in different seasons, so as to ensure the continuity of the floral presence throughout the arc of the year.

The work is not handed over to the clients as a finished product, but as an organism at the beginning of a new process of transformation, which will be carried out by them and by nature together. The beams and the wooden walls that surround the spaces outside the house, in fact, are not a mere style, simple prefiguration of the 'ruin', but the scaffolding of a continuous construction site that from now on will proceed according to its own rules, entrusted to the care of clients and their needs.

In keeping with the winding criterion, in the old factory building, which is surrounded on two sides by private gardens, the private rooms of the owners and guests have been arranged, as well as the kitchen and the dining room.

The living room has been specially designed for a new pavilion, adjacent to the existing building. This pavilion is immersed in the common garden, which houses, among other sculptures of the private collection, the "Pozzo nel Cielo". A curved glass wall surrounds the living room space that has no internal structure, but only a cover that apparently floats in the air. All around, a forest of wooden reeds act as a filter to the light.

The reeds also have an olfactory connotation, since they are made of cedar wood and smell when they are wet by rain. Between the curved glass envelope and the artificial cane thicket there is an aquatic garden, which enhances even more the integration of architecture and nature. 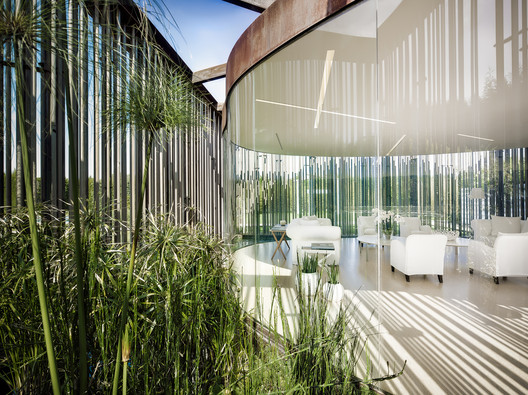