Such spaces have become so popular (and more crucially, financially viable) that there has even been a rise in purpose-built structures that mimic them. Not without reason. The flexibility and scale of these structures render them ideal for a wide variety of purposes, from art display to loft style apartments to open plan offices.

One such example can be found in Dunkirk, a small city in northern France that hugs both the coastline and the nearby Belgian border. When FRAC Dunkerque, one of a set of decentralized independent regional arts centers in France, set a competition in 2008 to develop a permanent home for their growing collection, Anne Lacaton and Jean-Philippe Vassal saw the opportunity, not for an attention-grabbing icon, but to celebrate the industry and history of the region.

Dunkirk’s story echoes that of so many industrial centers that deteriorated after World War Two: the wartime production that kept the city alive during the conflict collapsed, rendering large swaths of the urban fabric and population redundant. As people moved away in search of more stable opportunity, the industrial areas fell into disuse and disrepair. In Dunkirk, the shipbuilding structures - halls, dry docks, and ports - that occupied the city’s coastline were demolished or abandoned. Among those left to rot was what is now FRAC’s Halle 2, a majestic whose large windows and cavernous scale elevated a standard manufacturing space into something almost holy. Locals called it the Cathedral.

The space caught the eye of Lacaton & Vassal, who proposed renovating the existing hall and building a twin immediately adjacent to house both FRAC’s exhibition and storage spaces. Much as they had done in their previous renovation of Paris’ Palais de Tokyo (and with more than a hint of inspiration from the Tate Modern), they left the existing ‘cathedral’ almost entirely untouched, suggesting instead that it house rotation large-scale exhibitions or public events. “[The space] was so strong from an architectural point of view, and aesthetically so overwhelmingly beautiful, that we didn’t want to fill it,” explained the architects of their proposal. Instead, the adjacent twin building would house the more-traditional fare, with construction costs kept cheap through the use of prefabricated materials.

The audacious scheme – so apparently risky at the time that FRAC retained a backup scheme from De Aluza / Flint – was realized in full, opening to the public in 2013. Lacaton & Vassal’s new structure mimics the form and scale of the original hall exactly but is constructed of a soft bioclimatic envelope reminiscent of the works of Buckminster Fuller. The two are discrete structures, indelibly joined at the metaphoric hip. “The public footbridge (previously planned along the facade) which crosses the building becomes a covered street entering the halle and the internal facade of the FRAC,” explain the architects. “...the functioning of each of the buildings is separated, or combined.”

The design, particularly from a distance, has the effect of an afterimage. The material differences of the identical forms give an eerie sensibility of mass and shadow, sound and echo - the primacy of which switches at night at the translucency of the ETFE sheeting makes a lantern of the building.

The building is a masterclass in reuse and preservation. Like big-budget peer Tate Modern, it gives visitors an indirect history lesson in addition to a lesson in art, letting them appreciate and understand the building’s former use while confidently looking confidently towards its future. But like the Tate - and so many other industrial conversions - the flexibility of space sometimes overwhelms the purpose. When there’s room to do anything, it can be tough to know where to start. 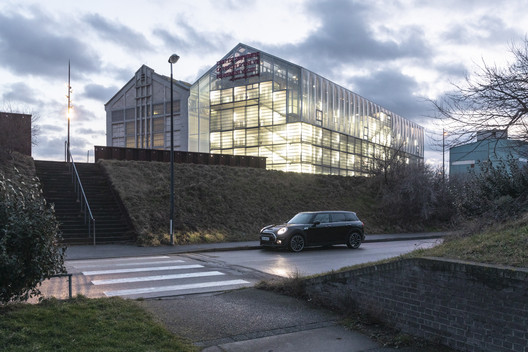