Frank Gehry's Grand Avenue towers have officially broken ground in downtown Los Angeles. After over a decade in the making, the project was designed from a central retail core into the two terracing towers with a mix of retail, entertainment and residences. The $1 billion complex aims to turn Grand Avenue into a full entertainment district. Conceived as a public-private partnership, the project is considered a capstone for the Grand Avenue Redevelopment initiative to complete the city’s main downtown cultural corridor. 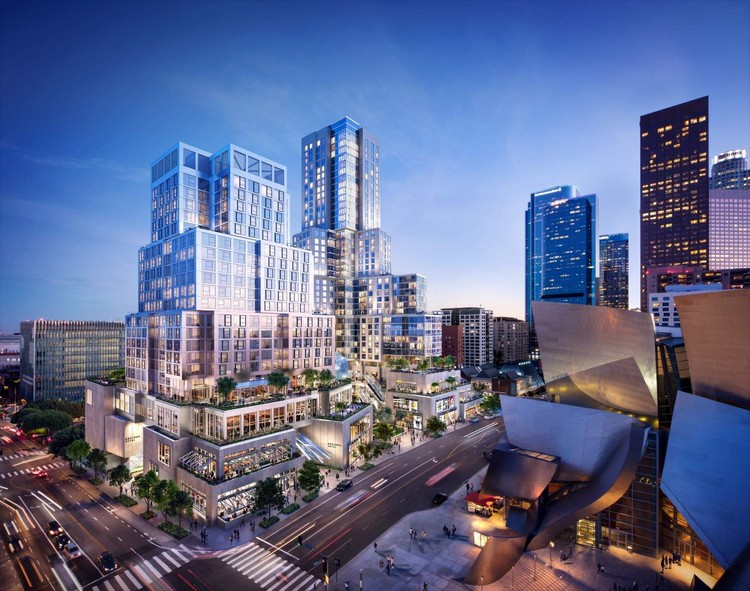 Sited across from Gehry’s Walt Disney Concert Hall, the new project is developed by Related Companies and CORE USA, with AECOM acting as the architect of record. As Urbanize LA reports, the complex will include a 39-tower residential tower with 113 condos and 323 apartments (20 percent of which will be available to low-income tenants), and a 20-story tower housing a 314-room Equinox hotel. At the base, shops and restaurants will intermix with entertainment areas including a movie theater. Commercial areas will wrap the courtyard and connect to the sidewalk.

The building features stepped building heights and offset masses to create terraces for amenity decks and outdoor dining. As Gehry said, “it’s been exciting to build something so close to something I built before and to be able to have them talk to each other.” A pedestrian walkway will cut north-to-south through the property at ground level, allowing pedestrians to move between Grand and Olive, and also preserving a view corridor of the iconic concert hall. “With The Grand, we’re not just building buildings, we’re building places,” said architect Frank Gehry. “We are trying to make a place for people not only to live, but also to gather after concerts or performances, and my hope is that it will spawn other growth in the neighborhood. My dream is that from time-to-time, we will be able to close Grand Avenue and have street parties with projections on Walt Disney Concert Hall." 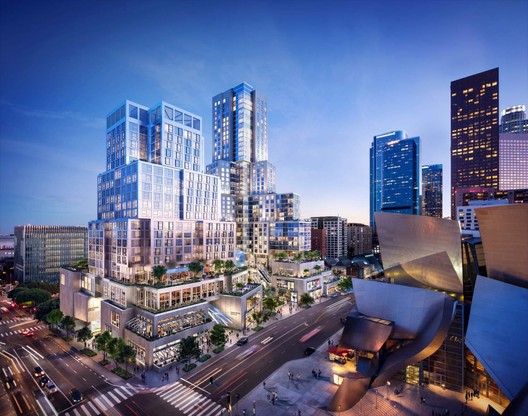